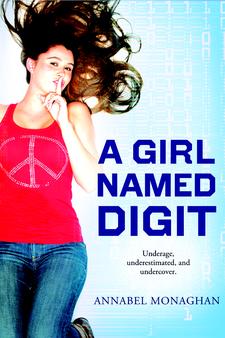 “I knew very little about John (besides the exact outline of his jaw and the way it framed his mouth like rigid parentheses around a soft word that is too delicious to be spoken aloud).”

This teen spy thriller with its clever, beautiful writing is a breath of fresh air in a sea of same old, same old.

Farrah “Digit” Higgins is no ordinary teenage girl. She sees patterns in random numbers, aces the Math SATs and has an IQ that you would need the Fibonacci sequence to figure out. But despite her extraordinary mathematical talents, all she wants is to be normal and blend in. With life on autopilot and auto-response (“cool, me too!”), things are manageable, predictable … and normal. But everything changes when she discovers a mysterious code on television that is part of an eco-terrorist plot, and suddenly becomes a target. Sucked into a violent underworld of terrorism and on the run with no one but an attractive young FBI agent on her side, Digit must use her gift to save hundreds of innocent lives. But while embracing her “true Self” is a no-brainer, putting her heart on the line may turn out to be the most dangerous choice of all.

Smartly written, A GIRL NAMED DIGIT is a fun, fast-paced read that will keep you turning the pages until the very last bumper sticker. Digit is an admirable but down-to-earth heroine, like the superhero next door or the best friend with the secret crime-fighting alter ego. The combination of teenage awkwardness and intellectual brilliance in this character just works. Your heart will soar at her first kiss, dive at her near death experiences, and tremble at the threat of discovery. Monaghan’s writing is deliciously complex without being overly so, and her quirky turns of phrase as well as Digit’s sarcastic but intelligent voice keep the narrative fresh. A lively mix of thrills, romance, action and humor, A GIRL NAMED DIGIT is definitely one to add to your beach bag this summer. 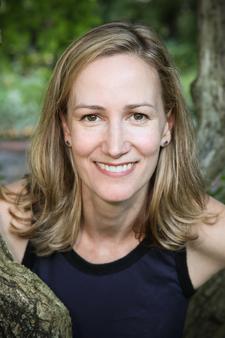 theLoop: What made you want to write this novel?

AM: I’ve always wanted to write a novel and this particular novel kept nagging me to be written. Years ago a friend of mine suggested to me that a kidnapping in the news might have been a fake, and that thought stayed with me. Why would someone need to be fake kidnapped? (for her own protection) Why? (because she knew too much) What sort of person knows too much (a math genius…) And poof! That’s where Digit came from. I wanted this book to be a suspenseful, mystery / comedy but I also wanted to write a book about coming to terms with who you really are and not hiding from your genius. I think everyone has a little genius in them that’s dying to get out.

theLoop: I loved the authenticity of your sequence/code/pattern explanations, although I have to admit that I pretended to be smarter than I was, nodding cleverly at appropriate moments in the book. How much actual research did you have to do for this novel?

AM: You and me both! It’s funny that this made us pretend to be smarter than we were, while Digit spends so much time pretending to be dumber than she is. I did a lot of research, both online and at the library, to find codes that could appear in everyday life but that could only be solved by someone like Digit. Once you get the hang of the code and you know what you want the answer to be, it’s not that hard to back into it. Okay it’s kinda hard.

theLoop: How does living in Westchester contribute to Digit’s story? Did you have any real-life inspiration?

AM: Well, I grew up in Los Angeles so that inspired the beginning parts of the book. But there’s a lot of Westchester that sneaks in. In fact one of the codes that Digit has to crack involves Grace Church Street, which I can hear from where I am sitting on my deck right now.

I sometimes wonder if people who grew up in Westchester fully appreciate the trees here. I am preoccupied by them and occasionally pull over on the road to photograph them. Those trees play a big role in Digit’s psyche and frequently come up in her thoughts.

theLoop: I loved the scene with Olive near the end where her unexpected contribution ends up saving the day because it shows that you may never truly know people for who they are deep down. Do you think teens today tend to disguise their strengths (no matter how small) and play up their weaknesses to fit in?

AM: I’m not sure it’s just teens today. I remember it being like that 1,000 years ago when I was a teenager. Teenagers are, of course, in a phase of life where they are saying goodbye to childhood and trying to figure out what kind of adults they are going to be. How terrifying is that? They spend so much time with their peers that they tend to get a lot of information about themselves based on how they are perceived by the group. It takes a lot of courage to ‘fess up to being different, even if that difference is being a genius. The choice between blending in and sticking out isn’t always so easy.

theLoop: In high school, I was probably the Class Clown (I’m not proud), and in A GIRL NAMED DIGIT, Digit is perfectly content with the nickname of “Party Girl.” Do you see teen labels as being a big deal in our local schools?

AM: Everybody loves the class clown – and the best thing about being the class clown is that it makes you funnier. The mere fact that they called you that probably dragged more funny out of you. I know a few people who think I’m funny and the second they enter a room I become Chris Rock! That can be the blessing / curse of labels. And, yes, I see lots of teen labels, lots of sizing up and ranking at local schools. And, while I think that’s part of the natural human urge to make order out of things, it can be sort of dangerous to the person that’s being labeled. They can feel a lot of pressure or they can feel stuck. Digit is really the worst about this and has to learn as the book goes on that just because you’re smart doesn’t make you a nerd and just because you’re pretty doesn’t mean you’re not good at Calculus.

theLoop: Are you working on any other projects? What can readers look forward to from you in the future?

AM: Yes! I’m working on the sequel to A Girl Named Digit. I’m really excited about it. She goes away to college and becomes a threat to national security, all while still being unable to wear a striped shirt without getting dizzy. Everything gets taken up a notch in this next one – stay tuned!

Hi, i read your blog occasionally and i own a similar one and i was just curious if you get a lot of spam feedback? If so how do you prevent it, any plugin or anything you can suggest? I get so much lately it’s driving me mad so any help is very much appreciated. http://www.nicesunglasseshere.org/

Good day! This post could not be written any better! Reading through this post reminds me of my old room mate! He always kept chatting about this. I will forward this write-up to him. Fairly certain he will have a good read. Thanks for sharing! http://www.sunglasses4summer.net/