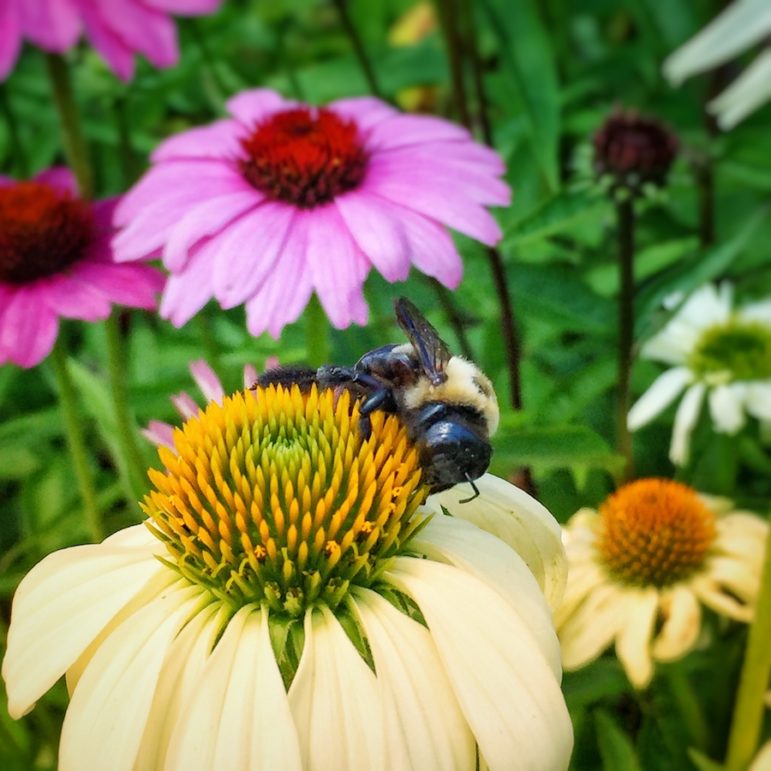 If you’ve always been afraid of bees, you might want to reconsider once you see the “bee hotels” created at the Sheldrake Environmental Center by a local Girl Scout working on a  Gold Award project. (Her name is changed to protect her privacy.)

Suzanne picked this project because her cousin, who is a beekeeper, spoke with her about the decline of the bee population and why it is important to help protect certain bee species by providing safe nesting spots.

“He told me that humans would not be able to live without bees,” said Suzanne.  In fact, bees pollinate crops that make up as much as a third of our food supply as well as pollinating trees and wildflowers that provide food for birds and other animals.

She was so impressed that she decided to take on her first ever environmental project. Her goal: to help slow down the rapid decline of the bee population.

According to many scientists, about 90 percent of bee species are solitary, meaning they live alone, not in hives. They do not produce honey and do not have a queen. Some common solitary species include leafcutter bees, mason bees, and carpenter bees.

The good news is that solitary bees do not sting very often because they aren’t defending a hive. The males generally have no sting and the females only sting if you step on one or handle it roughly.

Suzanne chose the Sheldrake reservoir and pond areas to locate her “bee hotels,” which can be made from hollow reeds, or hollow bamboo stems of different sizes placed inside a plastic pipe that hangs on a tree or a fence. The National Geographic website offers downloadable diagrams for building your own bee hotel, including a fancy deluxe model with different layers for different species and the more basic simple plastic pipe or wooden block.

Suzanne noted that she chose three different locations at Sheldrake because they were all near flowers for the bees to pollinate.They also had good sun exposure, were somewhat sheltered, and could be seen easily.

Female solitary bees like to lay their eggs in small holes. You can see when bees are using a hotel if they make a mud “door” to cover the entrance hole. This means the female has laid an egg inside. After the bee hatches, it will eat a supply of pollen until it is ready to break through the mud and fly away.

You can check out Suzanne’s bee hotels on a walk around the Sheldrake Reservoir at the Sheldrake Environmental Center located at 685 Weaver St, Larchmont, NY 10538. Phone: 914-834-1443