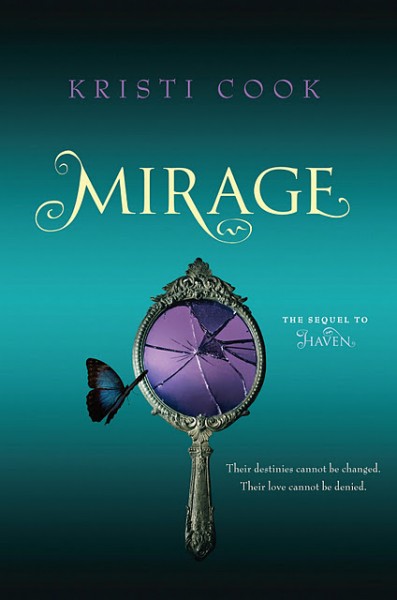 Review by  Amalie Howard, a writer living in Larchmont, and the author of Bloodspell

If you think vampires are done, think again .

Riverdale and former Voracious Reader (Larchmont) employee, Kristi Cook, is back for her second installment of the Young Adult Haven series,  Mirage.… and the mysterious—and sexy—Aidan Gray has returned to print and is in fine, fine form.

Back at Winterhaven—school for “gifted” paranormals like Violet McKenna—things aren’t perfect even though they should be. A dangerous killer is leaving a trail of dead bodies, and Aidan and Violet need to work together to stop him before it’s too late. Even though their relationship is stronger than ever, doubts begin to creep in, pushing them further and further apart, and as Violet trains to become the vampire slayer she was born to be, she begins to question everything … including her trust in Aidan.

TheLoop: So MIRAGE is the long-awaited sequel to HAVEN, which had fans swooning and glued to the pages … what goodies can we expect in this installment?

Kristi Cook: I think MIRAGE is a little darker, but also a bit more romantic.  In addition to the cast of characters from HAVEN who return for MIRAGE, there are a couple of new characters who play major roles in this story.

TheLoop: Your books have been called X-Men meets Buffy the Vampire slayer meets Twilight, incorporating a school—Winterhaven—for specially “gifted” students. Why do you think teens want to get lost in this type of world?

KC: I think because it’s somewhat grounded in “reality”–other than the fact that all the students/faculty at Winterhaven all have psychic gifts, everything else about the school is pretty normal high school/boarding school stuff, which makes it a little easier to teen to relate to than a more fantastical setting, I think.  In other words, it’s pretty easy to picture yourself at Winterhaven!

TheLoop: In MIRAGE, you have a girl who has visions of the future. Do you think this is more of a curse or a gift?

KC: At first, the main character, Violet, definitely thinks of it as a curse, mostly because she’s been unable to stop any of the bad stuff she’s “seen” from happening.  But once she learns to better control her visions–to utilize them better–she starts to see it as a gift, instead.

TheLoop: Are you working on any other projects? What can readers look forward to from you in the future?

KC: Right now I’m working on the third (and last!) book in the series–which is heartbreaking, really.  You put so much into developing a “world” and inhabiting it with a cast of characters, and then eventually you have to finish their story.  I’m dreading writing “The End” this time around!  I’m also working on several other projects, all YA/teen novels, and all in the early stages of development.  But I know there has to be life after Winterhaven!

Kristi Cook’s MIRAGE launch party will be at Books of Wonder in NYC on June 12th at 6pm.