At a gala event and film screening Thursday October 20, LMC Media paid tribute to the history of film making in Mamaroneck inside the newly renovated Mamaroneck Cinemas. The theme of the event, and the film itself were “Hollywood on the Sound.”

LMC Executive Director Matt Sullivan, who created the film, says, “The Sound Shore area is rich in filmmaking history. (The film) chronicles the history of filmmaking in this community.”  Featured in the film are notable figures who got their cinematic starts in Larchmont and Mamaroneck.

For example, legendary film director D.W. Griffith, whose studio ran on Flagler Drive in Mamaroneck, came to the village in about 1920 and eventually employed hundreds of local residents. The Fire Dept., for example, was used to spray water to simulate storms in one film. 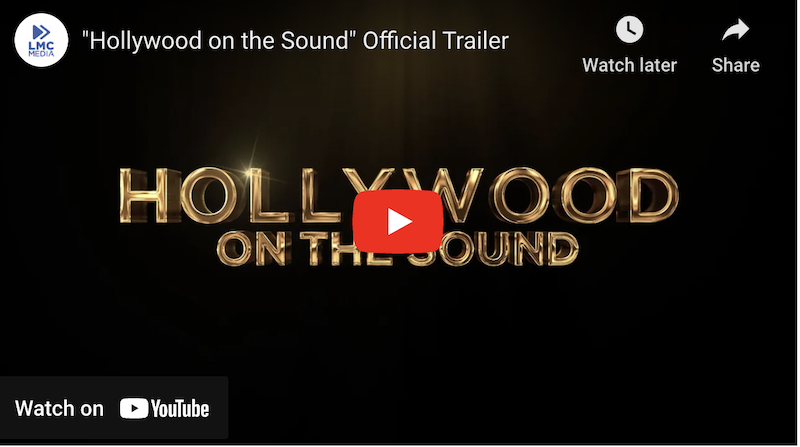 Actors Douglas Fairbanks and Mary Pickford also worked here and had summer homes in Larchmont, according to the film. The film also features current local residents and members of the Mamaroneck High School and Rye Neck High School communities, past and present, illustrating how the tradition of the study of filmmaking carries on today.

The Mamaroneck Playhouse, where the film was shown, originally opened as a single-screen balcony theater in 1925. In 2014, the theater closed. After extensive renovations, including the re-creation of a beautiful single screen theater and a few smaller ones, it re-opened in June of this year.

“We are hosting the Gala at the theater at no charge to honor Jeff Meighan and all the hard and important work LMC Media does for the community,” said Elgart, the theater’s owner.

Meighan, a co-founder of the Washingtonville Housing Alliance, and who has held Board leadership in the local Rotary, Bar Association, and Mamaroneck Public Library, has been on the Board of LMC Media for 8 years and has served as president since 2015.

LMC Media, a 501(c)(3) nonprofit organization, receives most of its funding through cable franchise fees.  These fees have been declining due to residents’ use of alternative television and streaming services.  The Gala hoped to raise funds to replace these reduced fees.

About LMC Media
LMC fosters relationships and strengthens the social fabric of our community by sharing the talents, the experiences, and the creative output of friends and neighbors and by keeping the entire community informed about the work of our local governments, schools, and volunteer organizations.  LMC Media was founded in 1983 as a nonprofit organization.

Polly Kreisman
Polly Kreisman founded and began publishing theLoop in 2007. She is a 15-time Emmy Award winning former television reporter. In New York she worked at WPIX TV, WWOR TV, WNBC TV and NY1. She covered politics on Capitol Hill in Washington DC earlier in her career. For the past several years she has pursued professional acting roles in film, television and commercials. She is the mother of twins, and therefore nothing scares her. She lives in Larchmont.
Facebook
Twitter
Pinterest
WhatsApp

The Foundation of The JKK

And,LMC media, Rosa Parks and Jackie Robison were not to first to do what made them famous. They are recognized for pounding racism into society. Birth of A Nation which I have seen many times glorified the right to be demonized. As did Thomas Jefferson who stated that he never met a Black person with any culture or appreciation for art. I welcome a debate on LMC Tv who often has denied my participation.

LMC Media
Reply to  The Foundation of The JKK

We do not know who you are through the name you have used in your comments. LMC has never denied anyone’s participation as a platform for free speech. If you live or work in the Larchmont and Mamaroneck community, you can sign up as a member of LMC Media, which gives you the right to produce your own programming. We welcome that. Visit http://www.lmcmedia.org for more info.

The Foundation of The JKK

D.W Griffith is responsible for founding the KKK and killing of hundreds and thousands of Black and Brown families. His film, The Birth of a Nation was first shown in the White House were members of the court acted as its head. His being honored is indicative of the embracing of racism in this village.

LMC Media
Reply to  The Foundation of The JKK

The KKK was founded in 1865. The film was released in 1915. Griffith was not responsible for founding the KKK. Sadly, the film (The Birth of a Nation) did reignite interest in the KKK and is one of the most controversial films in American history. Griffith is not being “honored” in the film. The goal of the film is to explore the filmmaking history of the Larchmont and Mamaroneck communities. One does not have the ability to erase history. That would not be responsible journalism. We invite you to watch the entire film, which also discusses the role that “The Birth of a Nation” plays and how Griffith made cinematic history, while distorting American history.