Lawsuit Against Hampshire and Mamaroneck Zoning is Dismissed 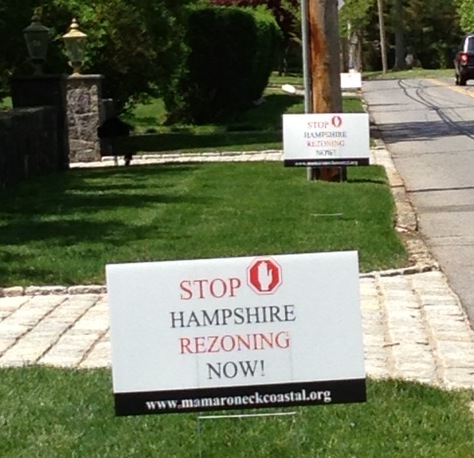 A court has dismissed efforts by a local citizens group in Mamaroneck to enforce zoning regulations at Hampshire Club which the group sees as an effort to pave the way for development of condominiums on the 116 acre golf course.

The lawsuit was brought against both Hampshire and the Village of Mamaroneck Zoning Board of Appeals. A copy of the decision is below.

“Justice Jamieson’s decision got it right,” said Michael D. Zarin, counsel for Hampshire. “Generalized neighbor opposition to a proposal cannot form the basis of a municipality’s land use decision making. We hope the Village will also recognize this important principle when reviewing any future applications submitted by Hampshire.”

A statement reads, “The dismissal of the Coalition’s lawsuit …means that Hampshire can continue to host events at the iconic club on the Long Island Sound as it has for 88 years.”

But Coalition attorney Stephen Hess says, “The Hampshire statement is misleading in the extreme.  The Coalition’s goal in this litigation was simply to require the Club to be operated as the independent non-profit entity that the Zoning Code requires, not as a vehicle to pass on revenues to a for-profit partnership in the form of “rent.”

The lawsuit is one piece of a complex and on-going struggle between the two entities, with Hampshire seeking to build condominiums on the property, and the Coalition, which hopes to keep the land, which it sees as fragile and flood-prone wetlands, as open space, now a Country Club and golf course.

The Coalition, formed in 2013,  says it plans to appeal. “We believe the court erred by disregarding the admitted facts in the record before the Zoning Board  that the club ‘s principal officers and directors all had financial ties to or actual interests in their landlord’s joint venture.  The Coalition believes this made the club’s non-profit status a sham.”

But Thomas Nappi, Hampshire’s senior project manager says, “This is a victory for Hampshire, its members and for the wider community because this small group should not hold sway over the future of the club and how the club operates.”

Recently, Hampshire, which sits on 116 acres in the Orienta area of Mamaroneck,  presented two separate condominium plans to the Village board, and the Board rejected the rezoning that would be necessary to build a 121-unit luxury condominium complex.