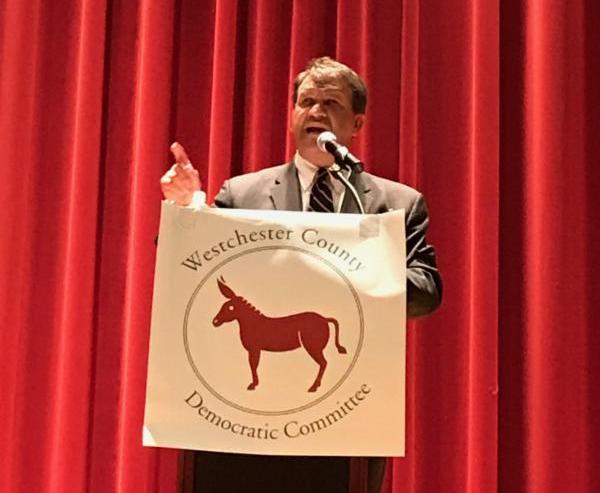 Democratic New York State Senator George Latimer (D – Port Chester)  won the party nomination Friday to face off against incumbent Republican Rob Astorino in the November general election.
“The victory culminates weeks of coalition-building among the dozens of municipal Democratic Committees countywide that formed the base of Latimer’s formidable results,” reads a press release from Latimer’s campaign.
“I am honored and humbled to accept the Democratic nomination for Westchester County Executive,” Latimer said.
“We have a County Executive who is more concerned with pushing Donald Trump’s divisive agenda and furthering his own statewide political career than working for the people of Westchester. We have an opportunity to end Rob Astorino’s disastrous leadership and restore opportunity and prosperity to our county. I will build on our growing coalition to bring new voices and new ideas into the process, and be a County Executive that serves the people, and not the other way around.”
Latimer’s victory was the result of a vote tally by party officials at the Westchester County Democratic Committee headquarters in White Plains. Party leaders had initially gathered in the city Wednesday night at the Westchester County Center for a convention to vote to nominate a candidate for the County Executive and other political posts. However, delays in the voting process for local judicial seats pushed the County Executive vote well into the night, prompting officials to postpone the vote count to Friday.
In terms of weighted votes, Latimer received 51,443 to Jenkins’ 20,585.5, giving the State Senator a substantial 71.42% of the total tally.
Latimer ran the board across large swaths of the county, picking up 100% of the vote for the committees out of Bedford, Harrison, Mamaroneck, North Castle, Pound Ridge, Rye Town, Scarsdale, Rye City, and North Salem. The State Senator also achieved a solid victory in many of the county’s cities, picking up 74% in New Rochelle, 81% in White Plains, and 75% in Peekskill.
Latimer’s final tally included a strong showing in Yonkers, where Jenkins was heavily favored to win. In the end, Latimer held his opponent to a narrow loss of 55% to 45%.
First time here? Please... subscribe to our newsletter!
Welcome back! Please subscribe to our newsletter!   Just click here.

As a long-time fan of George, he should stay where he is ….be more of an influence in Albany where the real money decisions are made. He also should not campaign as anti-Trump…the rhetoric doesn’t fit the reality…regardless of who the president is, REAL tax relief for property owners in Westchester is long overdue. Homeowners are spending thousands of dollars to cover Medicaid costs that are spiraling out of control and increasing school taxes to cover more student enrollment because we’re a sanctuary state….these are Albany’s responsibility. Astorino was on the right track…..somebody has to pay. Stay where you are George!