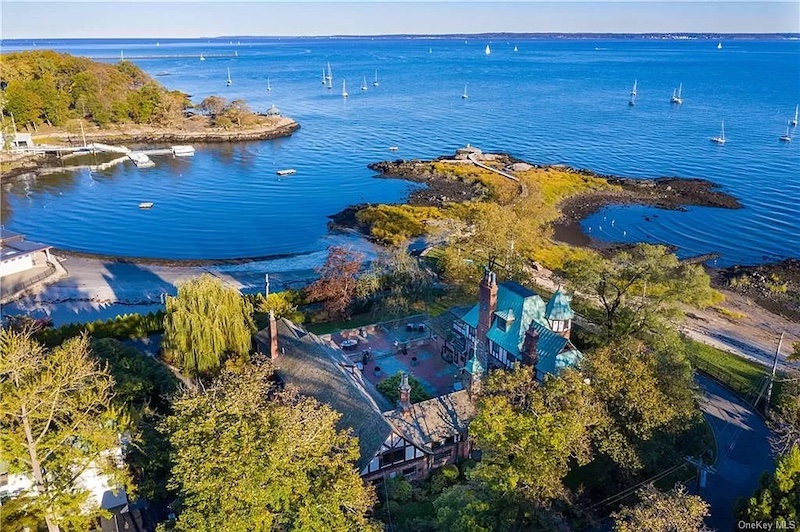 An iconic Larchmont home, the Sound Shore’s original “fixer upper” featured in a movie and television series, has changed hands again. The “Please Don’t Eat the Daisies” house has a new family moving in.

Previous owner Paul Kaminski completed the massive makeover for the unusual and captivating house on Beach Avenue and the new owners are ready for their adventure.

The home was featured first in Jean Kerr’s 1957 book about refurbishing a run-down mansion while shepherding a family of six children, with husband Walter Kerr, theatre critic for the New York Times. A 1960 movie starring Doris Day fictionalized Kerr’s collection of humorous essays, and it was followed by a situation comedy series on NBC.  The house though, was always a central part of the story —  quirky, charming and enchanting.  Instead of filming at the Kerr House, as many still call it, the design was replicated as a movie set in Los Angeles.

The home’s unusual layout lay in its original roots: It was a carriage house and stable for the estate which is now the Larchmont Shore Club.  It was later converted into a home, adorned with ceilings from a former Vanderbilt mansion and hand carved wood from  a 19th century Hudson River steamer.

In 2004 Paul Kaminski purchased the home and its eclectic features from the Kerr family and quickly embarked on a thirteen year journey of replacing the outdated and hazardous electric wiring and modernized the home to fit his family’s needs. All home renovations have their difficulties and expenses, but this iconic building offered even more challenges.

“You can’t just slap up something…it has to be real wood, real carved, everything is handmade and all of the new doors that we got were all handmade as well,” Kaminski said.  A multi car garage was converted into a kitchen, mudroom, family room and office. All of the staircases were relocated (yes, there are several) and bedrooms turned into splendid spaces with water views.

One of the most fascinating and unique features of the home are the outdoor carillon bells -twenty seven of them – which were restored and can now play two thousand different songs. (Jean Kerr used to ring the bells to summon her children home from Manor Park.) “You can program it to play any songs you want,” says Kaminski.

Despite its fascinating history the Kerr House has only changed hands a few times. Charles B. King was the first Larchmont resident to call the place home, them came the Kerrs, followed by Kaminski. Kaminski jokes that the new owners are the first whose last name does not start with the letter “k”.

Kaminski, who know lives in Florida, says the “Please Don’t Eat the Daisies” home, listed at $5.4 million was not an easy sell. “It did take longer… to sell such “a special house,” he says.

After several years on and off the market and in the hands of several realtors, he credits Linda Filby’s team at Compass Real Estate for understanding how to market this unusual and historic home.

“As always, we hired the best-in-class photographers and videographers, but because of the uniqueness of 1 Beach, we hired the best of the best.  Going the extra mile with multiple reshoots and attention to every detail, we ensured that the property had the best presence across our digital and print channels.”

Sounding sentimental and a bit nostalgic Kaminski talks about his time living here and his children who are now grown. “My time in it has passed. It’s really great to sell to a family is going to use it….,” and no doubt, love it.

I’ve wanted to get an inside view of this house since I was a child and watched the film and saw the TV series. My grandmother, a nearby homeowner, told me all about it. I’ve driven by for years, looking at the house as much as I was looking at the beautiful view of Long Island Sound. If only…