It’s so cold that they had warm oatmeal and cooked eggs for breakfast.

I don’t mean my children. I’m talking about my chickens. They’re actually doing better in this weather than a lot of us, though we are treating a couple of them for frostbite on their frozen pink combs.

Welcome to Little House on the Hutch, 17 miles from Grand Central, though some of my friends just refer to it as the Kibbutz.

A small group of us have a coop and are raising chickens- six hens at the moment. Sixteen more, day-old chicks of varying breeds will arrive at the Larchmont Post Office when the cold spell breaks, courtesy of mypetchicken.com, and will grow under heat lamps in the garage. It’s perfectly legal in many Villages and Towns in Westchester County.

Every day there is a gift of fresh, organic eggs; some are pastel colored, like Easter eggs, some a rich brown, and all delicious with their bright orange yolks.

My neighbor Joyce got the ball rolling when she bought a small flock of chicks at a farm supply store in Connecticut almost two years ago, which she and her oldest daughter tend with an almost religious fervor.

My children and I were smitten with each goofy, feathery, curious one of their hens. Last Mother’s Day, we got four of our own, at Benedict’s Farm, including Butter, a Buff Orpington and Tiger, a Speckled Sussex. 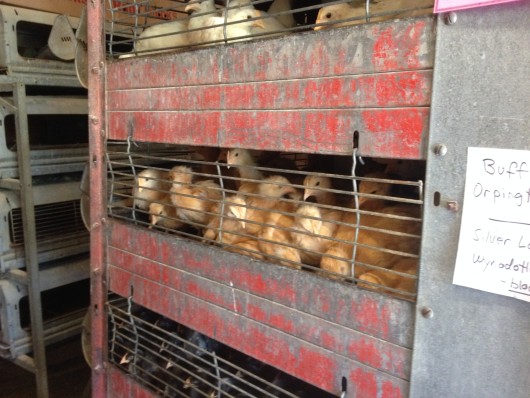 During the summer months, a few hens foraging around the yard can be mighty entertaining. And by Fall, we were reaching into the nesting box in the coop and gathering about one egg per hen each day. 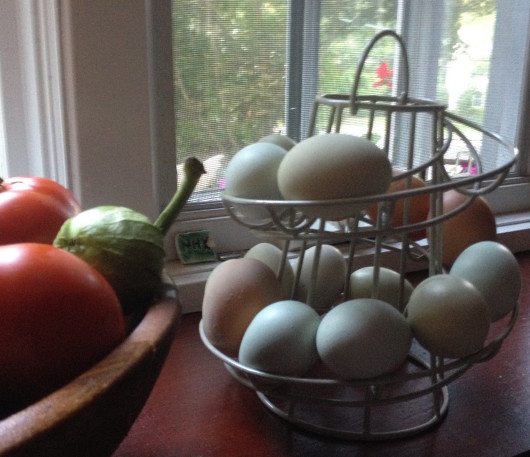 Heartbreak came easily, however.  Two of our four, one we had named Boots for her fluffy feather ankle warmers, succumbed to our tenacious standard poodle when we let them free range in the yard. Two of Joyce’s met more primordial ends to a hawk, and a raccoon, respectively.

And Salt and Pepper, a pair of Silk Bantams we bought on Long Island, became prey for probably that same raccoon. They had been separated from the rest of the flock in a dog crate after we discovered Pepper was a rooster, and under the cover of night that nasty raccoon just reached through the bars for dinner.

People always ask if you need a rooster in order to get eggs. You don’t.  And in this environment, you really don’t want a rooster unless your neighbors are really understanding. But sometimes a rooster slips through a purchase of very young hens because it can be a challenge for the supplier to tell the difference. Then the challenge is to shut him up at 5 am. 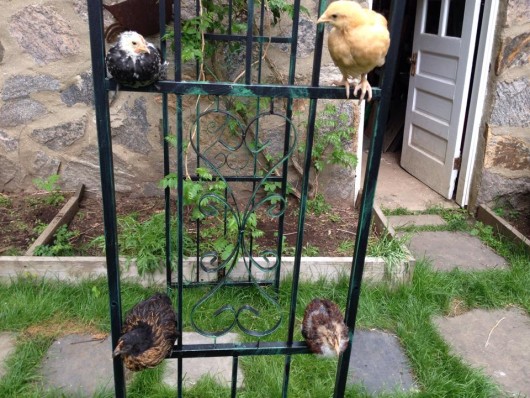 The media is full of stories: more suburban homesteads are raising chickens (“The ‘It’ Bird”, claimed the New Yorker) than ever before. Our friend Chaim Cohen, who has a local plumbing business, says he installed water lines for a local chicken coop that cost as much as a small car. We just schlep a hose. 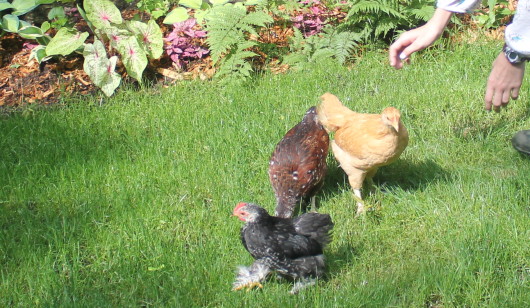 Our coops came mail order, like a set of Ikea furniture for fowl, and are surrounded by staked netting to give the girls a big run.

It’s not like there’s a Feed Store around; the closest places that sell organic feed are the Bronx and Greenwich, but the real good stuff is much further away. We learned to add a little apple cider vinegar to make up for no antibiotics in the feed, yogurt for hard shells, and I found a ready audience for stale bread, and my baking mishaps. Over the summer, we found what we don’t eat from the CSA box, they do. 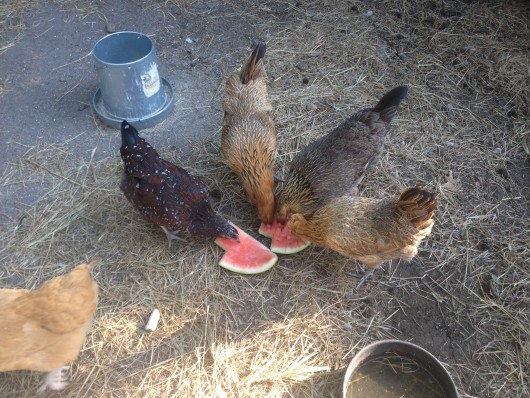 But really, we’ve all learned so much more. 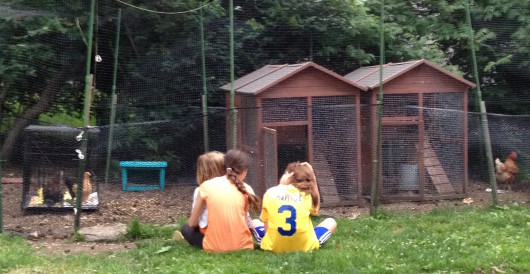 Our chickens are well, thanks! I believe the law states you may have chickens on your property unless you are “manufacturing,” ie selling the eggs, etc. We had a situation where our kids were selling eggs at a little stand, much like a lemonade stand, and a neighbor called the cops, who shut that down pretty quick. Too bad, because some nice people really enjoyed the eggs.

Hi – I live in the Town of Mamaroneck.

What are the rules regarding raising chickens?

How are you chickens doing?

anything for a joke

but i am a vegan