Got a teen looking for a summer read? 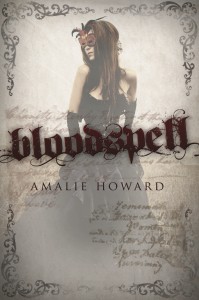 Suddenly he couldn’t move a muscle. They smoldered with a terrible black anger even as her mouth returned his kiss. It was as if they were two separate beings, the sweetness of her mouth upon his, and the darkness of her terrible eyes draining the life out of him. Christian could feel her heart racing, the fury of her blood uncontrollable, and he knew that if she couldn’t rein it in somehow, he would be lost. Already his hunger eviscerated him, he could feel the holes in his gut as those eyes, so blackly terrifying—hers but not hers, sucking everything from him, taking, feeding … killing. He felt wetness on his face.


— from Bloodspell, by Amalie Howard

It takes a calling, skilled writing and more than a little courage to release yet another vampire story these days, but Larchmont writer Amalie Howard has created a world of vampires and witches that addresses many real-world issues faced by  modern teenagers.

“My characters face a bunch of conflicts, similar to ones teens face today, like fitting in and being true to who you are, “ says Howard, the mother of three children, the eldest in first grade, and who was working fulltime, until her husband took a job that had him constantly traveling.   (Perhaps the biggest accomplishment here was getting a novel written at all.)

“Readers will identify with most of the themes, and of course, they’re all disguised within an engaging story”

Bloodspell is released tomorrow (June 1),  with an official book launch in Larchmont, a masquerade party at the Voracious Reader June 10.

Check out the trailer:


I thoroughly enjoyed reading Bloodspell.  It was a gripping read that I could not get enough of. I read it from beginning to end without even looking up. I love it when a story can take hold of you like that. It feels like you are being tossed up and down in a whirlwind, never knowing what will happen next. I might have thought that Bloodspell would fit the chick flick stereotype of books like Twilight, but I was very wrong.

When I started to read Bloodspell, I thought that it was just going to be another vampire book. All other vampire books fit a very basic stereotype. An amazingly sexy guy falls for a girl-next-door kind of person. The girl is usually helpless and slightly ditzy, and the boy is a perfect, everything-you-could-possibly-ask-for guy of everyone girl’s dreams. They fall hopelessly in love with each other, the girl finds out that the guy is a vampire, is even more attracted to him, and they live happily ever after, with the guy saving the girl from the various perils of being mortal. That’s all fine, but it gets kind of boring after a while. Luckily, there are books like Bloodspell to wake us deprived teenagers up from our stupor.