Larchmont Police Officer Remembered as Killer is Paroled after 44 Years 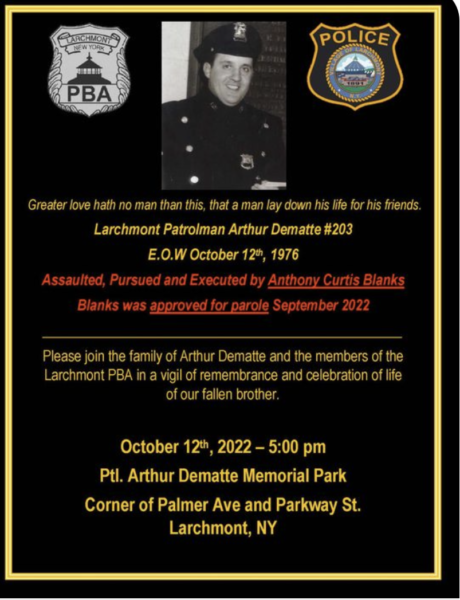 Dematte is the only Larchmont Police Officer to die in the line of duty.

The man who killed Larchmont Police Officer Dematte 46 years ago has been granted parole after more than a dozen rejections, and will be released from the prison at Sing Sing by Oct. 18.

Anthony Blanks, now 69, shot and killed DeMatte Oct. 12, 1976 while the officer was attempting to remove Blanks, a transient, from railroad tracks behind the then Daitch – Shopwell supermarket.

The suspect was able to gain control of Officer DeMatte’s service weapon and shot him. Dematte started to run off but Blanks pursued him and shot him in the chest.

Dematte’s teenaged daughter, Jane Dematte D’Amico, rushed to her father’s side from her job at the supermarket. She has since been one of the most vocal opponents of Blanks’ release.

Blanks tried to flee in the officer’s car, but it got stuck. He left the empty gun in the car and hid in some shrubs and was shot in the leg by responding officers.

Blanks, who had a history of mental illness, had walked from New York City after arriving there from St. Louis a few days earlier to look for a job. He said he had not eaten in two days and had taken PCP during that time.

The jury that convicted him of first-degree murder in 1978 rejected his lawyer’s argument that Blanks suffered from extreme emotional disturbance at the time of the killing. He first became eligible for parole in 2001.

Polly Kreisman
Polly Kreisman founded and began publishing theLoop in 2007. She is a 15-time Emmy Award winning former television reporter. In New York she worked at WPIX TV, WWOR TV, WNBC TV and NY1. She covered politics on Capitol Hill in Washington DC earlier in her career. For the past several years she has pursued professional acting roles in film, television and commercials. She is the mother of twins, and therefore nothing scares her. She lives in Larchmont.
Facebook
Twitter
Pinterest
WhatsApp
Subscribe
Login