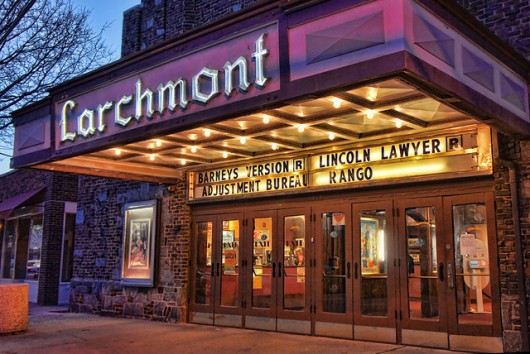 But a local group, Friends of the Larchmont Playhouse,  has already gathered $610,000 in pledges to preserve the Cinema as a center for film, and continues its efforts to find a partner with which to purchase the building, currently on the market for $1.5 million.

The local group is in talks with three separate potential partners, but due to privacy concerns they are unable to be identified at this time.

About 550 local residents have already made pledges to contribute money and others interested in pledging can do so at larchmontplayhouse.org. Updates on the group’s progress are also posted on its Facebook Page, Keep the Movies in Larchmont .

Money will be collected only if the group is successful.  The group recently received 501c3 certification from the IRS.

The theatre has a complicated ownership history, says Ellen Zuckert, who with another Larchmont resident, Elizabeth Bradley, is leading the group of about 20 dedicated volunteers.

The Playhouse is now owned by a developer in Texas who was interested in building a four story residential building on the site, but is unable to because the building is zoned for two stories.

In June, Zuckert and Bradley formed the group in an effort to save the theatre from demolition. Zuckert said she hopes the space can be converted into a complex like the Metrograph in Manhattan, with events, movie series and a restaurant.

“The support has been amazing,” says Zuckert. “We’ve had everyone from children selling lemonade to seniors going door to door. Lawyers and Real Estate professionals that live in town have given us their time pro bono.”

Zuckert says even if the purchase is successful, a 2014 engineers report shows the building needs up to $400,000 in immediate repairs and about $300,000 in upgraded cinema equipment.

The shuttering of the Theatre has been met with protest, even sadness, by a number of residents, who fear Larchmont will lose a cultural resource.

“We don’t expect it to be a permanent closure,” says Zuckert. “We are optimistic we will make this work.”