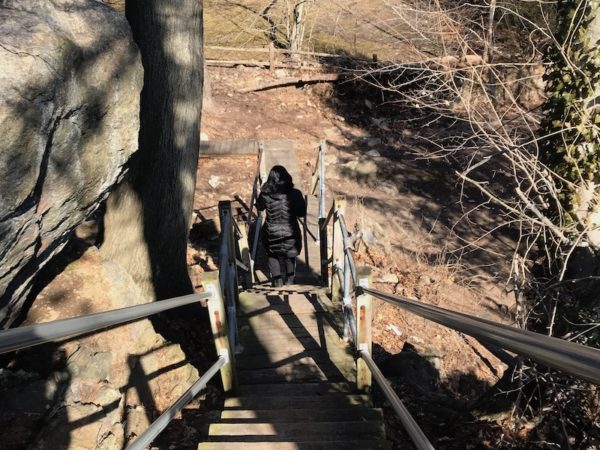 Residents of the Pine Brook neighborhood in Larchmont, near Pine Brook playground and around Coolidge Street, are unhappy about a decision by the Village to remove a well traveled outdoor staircase, used as a shortcut to town.

A sign indicates the stairs will go on March 4.

“One of the most wonderful things about Larchmont is its “walkability,” writes resident Mary Beth Kilbride. “The myriad stairs throughout the village contributes to this feature.  I am outraged that the village would propose to cut off an entire neighborhood and deny residents access to the park, town and train station.”
A petition has been started (https://www.change.org/p/village-of-larchmont-building-department-pinebrook-park-staircase-removal-resident-responses-needed) and letters have been sent to village officials.
” If it is allowed, Kilbride adds,  “then similar scenarios could play out further threatening the residents’ collective experience of living in Larchmont. ”
We have reached out to Village officials for comment. 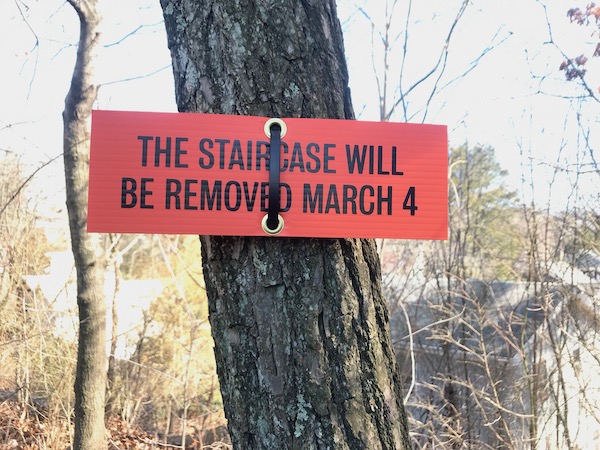 I recall a battle over these stairs 10 – 15 (?) years ago; except it was about a homeowner who felt his/her land was being trespassed upon.

I think neighborly comity ensued and the stairs remained.

This appears to me to be a liability / cost of maintenance issue that the Village of Larchmont should not be in the middle of if it isn’t Village property. The landing certainly is a beautiful Village Park, but I don’t think the conduit from Coolidge to the park is.

If that is the case, then those that want to access stairs should be willing and able to can pay for, maintain and insure the stairs (no VOL involvement required)

With all due respect, Long Time Village Resident, your memory is inaccurate and your position based on your memory is misleading. The stairs were built more than 17 years ago by the Village on Village property. To refresh your recollection, there has always been foot traffic from Coolidge Street to the park. About 40 years ago, the owner of 4 Coolidge Street built steps on his own property into the park to prevent people from getting hurt when they were crossing his property. Many years later, a subsequent owner refused to allow people to cross his property and law enforcement and lawyers got involved. In order to alleviate the tension, the Village built the current steps on Village property into the park, the residents gave up their legal claim that the path was an easement and a fence was built between the park and 4 Coolidge Street. We have lived here 16 years and the stairs were not new when we moved in and the owner who objected was no longer living here. There is no dispute that the Village built the stairs on Village property and your argument that the Village is not responsible is wrong.

Helene is correct. The stairs were build by the Village on public property using taxpayer– not private– money. They have been maintained by the Village, periodically repaired, regularly cleared of snow and ice, since the 1990s (I’ve only lived here for 3 years, but that’s what I’m told). These are no less the responsibility of the Village than the streets and sidewalks and another other public stairs providing access to dead-end streets throughout Larchmont.

I stand corrected on the history here (and thank you for correcting me so civilly).

If the Village maintains, shovels and insures the other stairways that benefit only a few residents (ends of Roosevelt, Summit, Highwood Way, Cliffway) then they should do it on Coolidge as well.

Does the Village do that for other such stairways?

Every block in Larchmont has its own aesthetic which adds to the quality of life for its residence and makes our Village a place where people are willing to pay high real estate prices and taxes to live. For the residence on and around Coolidge Street including Harrison Drive, Shadow Lane, Robbins Nest Lane and several other, the stairs provide essential access to the recently renovated Pinebrook Park, the town, the train station and the walk to Chatsworth Elementary School. There are many sets of stairs throughout the Village which serve those in their immediate area. For the Village to set the precedent that it can simply choose to remove the only access to the park on one week’s notice by posting a small sign should be an ominous warning to all. Without these stairs, the commute to any of these places would be extended by an additional 5-7 minutes which is monumental during the morning walk to the train or school. Besides providing access and exercise, the stairs are surrounded by beautiful rocks and foliage which provides a meditative respite from the noise and traffic on Palmer Avenue adding to the value of our neighborhood. Moreover, by accessing Palmer Avenue via the stairs and through Pinebrook Park, there is a traffic signal. Without the access, residents are more likely to cross at Harrison Drive which is a very dangerous intersection given the added traffic from DeCiccos and the removal of the turn lanes onto Harrison Drive and the shopping center. It is beyond a doubt that when traffic studies were done to approve DeCiccos and the apartments, the access through the park was a consideration. The Village should not be allowed to shirk its obligation to maintain and repair access that it built for its residence. We hope that the Mayor and Trustees do the right thing and halt the removal of the stairs pending an open hearing with the residents.

Just a correction–the park, and the neighborhood, are named Pine Brook, not Pinebrook. Pinebrook is an area in New Rochelle, and Pinebrook Park is in New Rochelle, off Pinebrook Boulevard. Take a look at the street signs along the street that runs next to Pine Brook Park–they carry the correct name, “Pine Brook”. Of note is that the developer of the housing complex called “Pinebrook Condominiums” misnamed his project, despite being told by the Larchmont Planning Board, that he was doing so, which has led area residents and, apparently, The Loop to repeatedly get the name of both the park and the neighborhood wrong.

Why is the Village not held to the same standard as property owners? When an owner wants to build, alter or add on to their home, they need to apply for a permit, provide architectural plans that need approval from the building department. In the case of a request for variance, a certified letter must be sent to all neighbors in the immediate proximity. I would argue that the stairs are part of the village current architecture and NOTICE of the removal and plan for the space should have been provided.

Removal of the stairs will subject people to vehicular risk as they will be forced to use Harrison Drive where there is NO sidewalk for the partial route out to Palmer. (why there isn’t a sidewalk on Harrison Drive, a heavily trafficked thoroughfare, is another sore topic)

The Village has failed the community .. posting a sign is just not good enough.