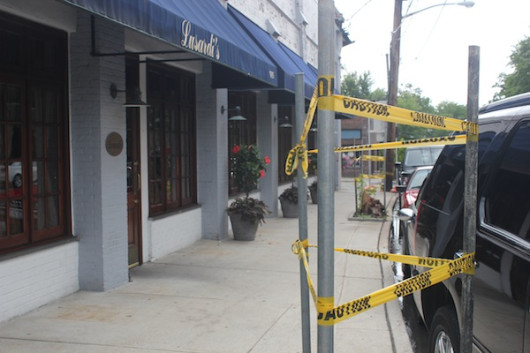 “It is tempting to say that you have to break an egg to get an omelet.”

Larchmont Mayor Anne McAndrews reponded to yesterday’s story about the aborted Streetscape project in part of the downtown area, saying the Village is in a holding pattern until the bonding company allows the project to move forward.

“It is frustrating that so many years of work by the Village Board, its engineers, landscape architect and attorneys have nothing to show except the stumps of some trees and a few broken curbs.  It should be obvious that having so little to show is at the heart of the Village’s declaration of default by the Contractor.

We asked the Mayor for specifics on the nature of the Village’s default with the contractor, but she declined, citing legal counsel.

“The Village’s goal is to finish the project and have the Palmer Avenue business district reflect the rest of Larchmont in its attractiveness.  Improvement of the condition of its sidewalks and trees was a major reason the Village applied for a grant in the first place.  The grant is considerable, over $800,000. in federal and state funds towards a $1.7 million project.

It is tempting to say that you have to break an egg to get an omelet.  In this case, that old saw is correct.  Old trees, especially those already severely trimmed by ConEd and broken sidewalks, especially those already uplifted by tree roots, have to be removed in order to build a streetscape that will attract shoppers and diners. While removing 29 trees and saving over 40, the Village will be planting about 35 new trees, carefully selected to thrive in a suburban business environment. The planting plans will soon be in the Library and on the Village website.

Yes, there has been a delay and it is very disappointing.  The Village is in an unenviable position of coping with the delay while hoping that construction with all its disruption begins soon.

So we just throw up our hands and do nothing? Can the Village answer the question about how Mount Vernon, Mamaroneck, Scarsdale, etc. could all afford to bury their wires and we cannot?

Perhaps the total amount of fees paid to Con Edison in the past year from Village residents, and from our local government should be tallied up, along with the cost Con Ed will charge the Village to bury wires and this information should be sent to Gov. Cuomo in protest.

The governor just got rid of LIPA because of its dereliction during Hurricane Sandy, so perhaps he would respond to one instance of the greed and gorging that Con Edison has gotten away with.