“I walked in and he was laying on the kitchen floor, conscious, able to speak but slurring,” remembers  his wife, Jessica. “His pupils were totally dilated, his arms were in the air and shaking and he said, ‘I can’t move’.”

At first, the Berman family thought Brad had pneumonia, then the doctors explained it was his brain.

“The surgeon came in and said it was an AVM,” Robert Berman, Brad’s father said. “We had no idea what that was, we had never heard of it.”

An AVM stands for arteriovenous malformation and is an abnormal collection of blood vessels in the brain.

The surgeon removed half of his skull and stored it in his abdomen for blood supply. Brad was in a coma for nearly one month.

He is in recovery now, doing better each day. He is able to walk with the help of a cane.. And his family has started the Run 4 Brad movement.

Jessica says the funds raise will be used to enable the Burke Rehabilitation Center to build a lower limb robotics clinic for rehab purposes. Most of the fundraising is thru races, because of Brad’s love of running. 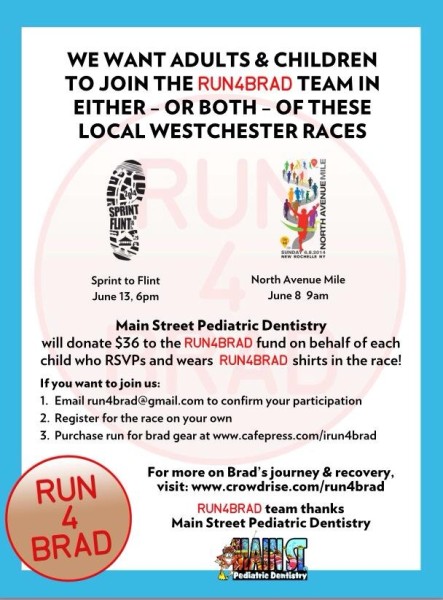