Larchmont-Mamaroneck Gets Its Own Early Voting Site 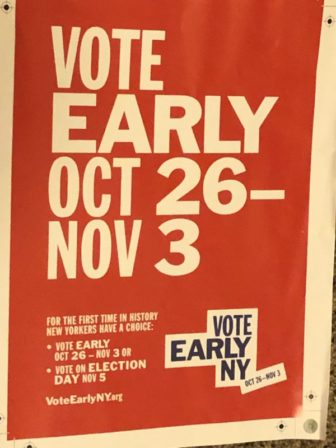 The Westchester County Board of Elections has expanded the number of sites available for early voting and now residents in the Town and Village of Mamaroneck and the Village of Larchmont will have their own early polling place beginning October 26th.

County Legislator Catherine Parker announced Saturday the Mamaroneck Town Center has now been designated as an early polling site after objections were raised to the Board Elections initial plans.

The BOE had intended folks here to schlep up to Harrison for early voting, but Parker convinced them to expand the number of sites so now voters in Larchmont, Mamaroneck (Village and Town) and the City of Rye will all be able to vote at Mamaroneck Town Center in the run-up to November 5th.

Parker says the Town Center at 740 W. Boston Post Road has ample parking and is easy for people to find (it’s where Mamaroneck Town Offices and the Police are located).

“It just makes sense,” she told us . “This is the first time we’ve done this and BOE was scrambling, but I needed to make it clear that the Harrison site was simply unacceptable for residents in the southern part of my district.”  Harrison voters, meanwhile, will do their early voting at the Veterans Memorial Building at 210 Halstead Avenue.

The New York Early Voting Act was passed earlier this year by the State Legislature and signed into law by Governor Cuomo.  It is a permanent change to the way elections are conducted in the Empire State.