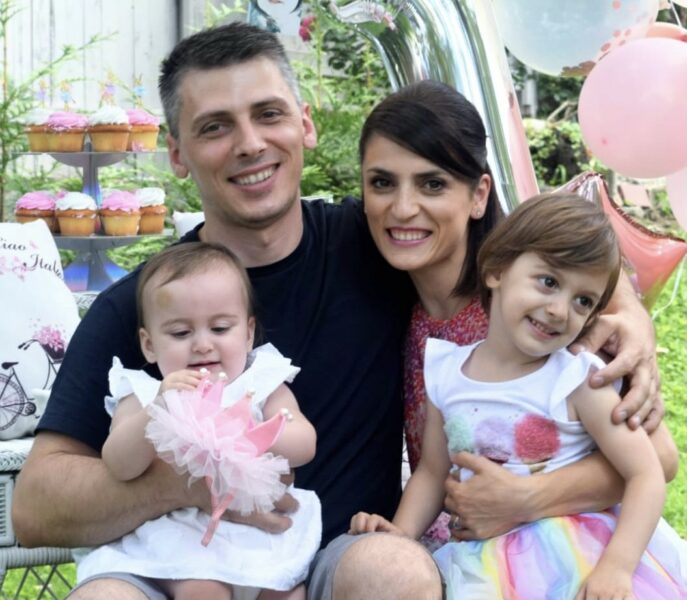 A simple paperwork mistake has triggered a legal nightmare for a successful community businessman, his wife and and two young girls.

Now, the clock is ticking for Eduard Beqaj, his wife Arjeta Kackini and their daughters. After more than 6 years building a life in the US, a mixup on their passports ended up invalidating their visas.

Arjeta and Eduard legally emigrated to the United States from Albania in 2014 so that she could pursue graduate studies in communications at Queens College, City University of New York. Arjeta had already completed a Masters Degree when they came to America on student visas. “We were determined to do everything by the law and maintain our legal status,” she says.

But recently, when she was offered a job as marketing director with an immigration law firm, she was shocked to learn of her own precarious immigration status. A new expiration date had appeared on the document that regulates the lawful stay of a noncitizen in the U.S. and changed her status, she says, “without our knowing.”  Arjeta now sees the tragic irony that the very complexity of the system she wanted to help others navigate now threatens to derail her own family’s life.

Her husband Eduard built a successful business, Begaj Refinishing, and they put down deep roots in the community. If they are forced to leave Eduard isn’t sure what will happen to his staff of five employees, or the substantial amount of his own capital he invested to qualify for a special immigration investors program (E-2). Meanwhile, Arjeta launched a career as a marketing specialist. All along, she says, “strictly adhering to visa renewal requirements, paying personal and business taxes, and payroll taxes for the last six years.”

In April 2020, she says “five months before our passports expired we renewed them at the Albanian consulate in NY. We thought we were okay; We have a valid visa, renewed passport, so now we’re fine, right?” Wrong. Eight months after that simple passport renewal Artjeta says they learned “we had been ‘out of status’ without our knowledge.” In other words, for eight months they were unaware that their visa deadlines had been changed. They were now essentially undocumented.

“We took immediate action to remedy this mistake, and applied for an extension of status with the USCIS (U.S. Citizenship and Immigration Services),” she explained. It didn’t help.

In late February the couple received a directive to leave the U.S. by April 20.  “I am desperate to figure out a way to fix this problem,” says Arjeta.

Just like so many Larchmont business owners, the Beqaj family has prevailed over the nearly insurmountable challenges forced by the pandemic. They believed that as lawful permanent residents they were on the road to become naturalized citizens. Their daughters, Ateira & Edea, ages 2 and 4 were born here in New York, and are US citizens by birthright.

After having spent more than $20,000 in legal fees, Eduard and Arjeta say they have made no progress with federal officials and immigration lawyers advised them that appeals are likely futile. Much of their family have moved from Albania and now live legally here in the United States.

“The plan right now is maybe we try for Canada,” Arjeta says, although that also involves an uncertain path and another series of endless paperwork. With a little more than four weeks left until they are required to leave. and with no firm destination, they have begun packing.

“We have invested time, energy and money in this country and at the moment when we were going to see the fruits of our work everything goes into the garbage.”

The young mother, who was looking forward to having her daughter attend kindergarten at Chatsworth Elementary School in the fall, says she has seen her hope for a bright post-pandemic life evaporate.

“We’ve made a summary of legal and governmental fees in the last six years,” she says, “and we’ve spent $170,000 just to stay legal” Now, it turns out by overlooking one administrative error they are not.

The Loop has reached out to authorities for comment.

Have you reached out to Nita Lowey & her Staff?

Has anyone attempted to reach out
to Nita Lowey’s Congressional Staff?