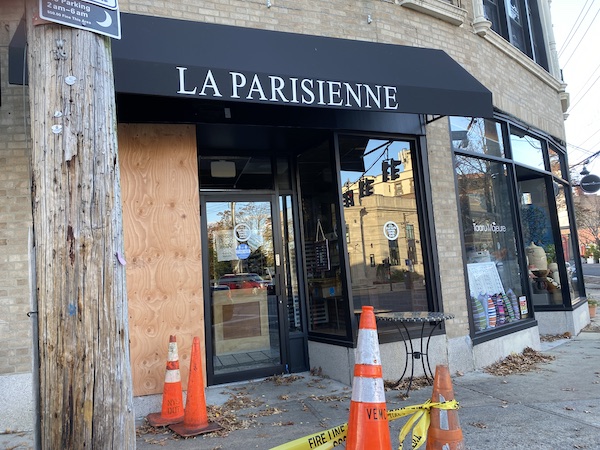 A new front window was installed on Tuesday, but the memory of a vehicle crashing through the front of La Parisienne Bakery pastry and coffee shop is still the talk among customers and employees.

It was Thursday, November 3 that a black Audi sedan drove onto the sidewalk, struck a crosswalk signal pole and smashed into the front of the bakery, located at 2116 Boston Post Road, across from the Larchmont Police Station and Village Hall. Luckily, the accident occurred just after midnight when the neighborhood was fairly empty and the shop was closed.

According to Larchmont Police, an officer on patrol who happened to come upon the accident, noticed the driver of the vehicle sitting on the bench in front of the location.  Police say 31 year old James Nabholz was arrested and charged with driving while intoxicated. The report notes that the car hit the traffic pole with such force it was found on top of the vehicle.

Police say there were no serious injuries. The store has remained open during repairs.