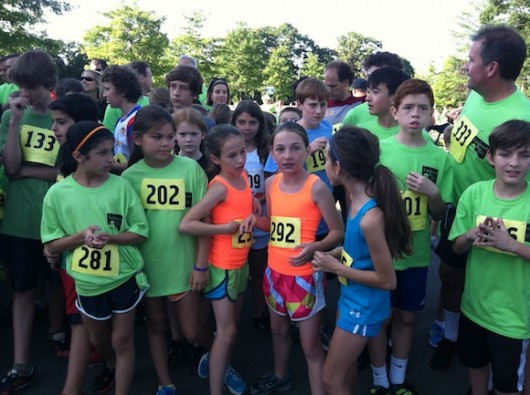 The Larchmont Village 5K had been a local tradition for years until 2007, when dwindling participation and increased expenses led to its demise.

Until now. With fresh energy from a new recreation committee, generous sponsors and over 500 runners, the tradition was reborn Friday night as the Sprint to Flint. And it may have been the most successful ever.

About 350 children participated in a 1 mile “Fun Run,” all receiving First Place ribbons, and 229 people ran a 5K course through the Flint Park area and Larchmont Manor, timed by the Westchester Runners Club.

Burgers and dogs followed and the bar was open at the American Legion Post 347. 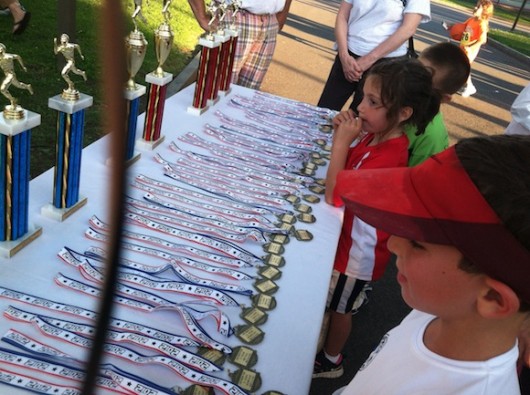 Below the photos are a list of race winners and organizers. And please send photos of the adult race…I was too busy running to shoot…

Great showing and a spectacular job by the teams organizing the race..are the overall final times broken down in age groups or overall times posted anywhere..? Maybe use a race timing system next year w mats and chips..Again though great time looking forward to next year.

Look at that — the men in the 40s beat all the other male age groups! What are the ages of the two overall winners?

Alexander Burks is 15. Probably the reason the 40 year olds performed so well is that there are so many 40 year old runners in Larchmont!

hi there, I won the ladies and am a 39 yr old mom of 3 :)
the blue ribbons were just finishers’ ribbons for the 1 mile fun run. No mention of being 1st place – it was a great initiative for the children to just participate in a run, many for the first time (including my own children).

Good for you – and congratulations!

Each kid got a ribbon mentioning the place, the date and the distance run. No mention of first place.

The ribbons were blue. Perhaps I assumed this was a way of equalizing all the participants.

The article said that 350 kids got first place ribbons. If they are just participation awards, that isn’t quite as bad.

350 kids all received 1st place ribbons? And we wonder why kids are so screwed up nowadays!