This week the Heard in Rye monthly speaker series featured the author of “Growing up Global: Raising Children to be at Home in the World”, Homa Sabet Tavangar. 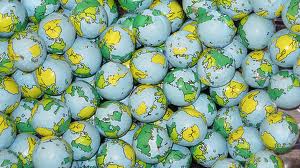 “Growing up Global” is a guide book of sorts that you can leave lying around with the hopes that someone else in your family will page through it.  It has helpful tips on international foods to expose your kids to, particularly if you can’t dash off to Tibet or anywhere else for that matter to soak in another culture.  It has lists of things, such as ‘Questions for Book Discussions,’  ‘Breaking patterns of unfounded bias’ in the section on ‘Politics vs. People.’  And, ‘how do economic conditions affect your global perspective’?

Aside from agreeing with your kid that he should give at his school to the Japan funds, or explaining that whole countries aren’t really bad, they just have leaders that can’t take a hint, like Sarah Palin, you try your darndest not to polarize the children.

But communities like ours are built for sameness. (For your viewing pleasure, Race to Nowhere).  They thrive on the comfort of belonging from the standpoint of fitting in, knowing your peeps.  The biggest downside to the spoils of Suburbia is its very lack of global-ness, except for trading tips for Caribbean vacations and summering abroad.

The room at the luncheon was filled with women who, as they went around the room and said that they were from places like Egypt, Denmark, South Africa, and Malaysia, also said that the thing they found most difficult was that  so many people they met did nothing more than observe them, from afar.

Coming from the very foreign Chicago, to Easterners anyway, I knew what they meant.  In the City you have the luxury of everyone looking at everyone from afar, and from close-up and from on top of you and you expect nothing else.

These women were also Muslims, Catholics, Jews and in the case of the speaker and some others, Baha’is.    What I knew of Baha’is was that in Wilmette, across from the harbor outside of Chicago, there is a magnificent Baha’i Temple, one of only seven in the world.  What we thought we knew of the Baha’i faith as kids was that the temple was one of the Seven Wonders of the World, except that is wasn’t.  It wouldn’t have hurt to Ms. Tavangar’s book lying around our house since in the Suburbia of the 60’s and 70’s was void of any of these exotic people or things.

What I now know about the Baha’i is that their message is about a worldwide community, a sharing of the vision of humanity as one global family, and the Earth as one homeland.

This reminded me of Hillary Clinton’s stab at the worldwide community in her 1996 book, “It Takes a Village’.  She spoke at the Democratic National Convention in Chicago about children thriving because their families are thriving and the society overall cares enough to provide for them.  She was raising the hackles of people like the GOP nominee, Bob Dole who responded by citing the “virtual devastation of the American family, the rock upon which this country was founded…it doesn’t take a Village, it takes a family.”

Yes, but what if your family is a bunch of dopes, Bob?  Whether you admit it or not, it’s easy to preach to the choir, and it’s even easier to hang out with them.  That seems to be the norm as so many of these women told stories of being shut out, and of their children suffering from anxiety, often due to feeling horribly different instead of just different.  I know the speaker had been verbally run out of Texas by a group that rejected her ideas of bringing mental equality to the un-American masses.  They ran this Northerner out of town too when I was but a young‘un.  Now wised up I know Texas does not own the patent on this.  Ms Tavangar is doing us all a huge service.

Fact is I’ve been running from people like me for years, terrified that I would be bored to death by my artificial woes and pedestrian concerns.  As a worldwide traveler in my childless adulthood, I spent of lot of time hanging out in Europe with friends, often taking on a British accent in order to not be me, to be a global citizen, sort of like the way all the movie stars talked in the ‘50’s.  And I felt like a star, like only that kind of freedom gives you, a respite from the expected, and a reprieve from the familiar.

This desire to be of the world led me to leave home and eventually end up here; I live in a town just like the one I grew up in.  So Bob Dole was right, it doesn’t take a Village, it takes having a sister around who will sit while you go to Vegas.  It takes having a mother who is still young enough to clean out your basement. I come up empty handed on both.

It takes having the luxury of not having to worry about being cast out of a fabricated Village caste system.  But that might start at the top where we now have to  metaphorically be held at gun point by folks like Michele Bachmann.  These false ideals are crazy enough, and then there’s that gun.

Kim Berns is a writer and interior designer living in Rye.