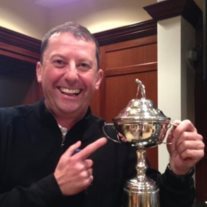 Friends of Larchmont’s Keith Harrington, 51, are deeply saddened by his sudden loss June 1.

A devoted father and husband, Keith was seen almost daily at Murray Avenue School, where he was very involved, and which his two children, Luke, 12 (now at Hommocks) and Lara, 7 attended.

Born in Liverpool, United Kingdom on March 26, 1963 to Peter & Marina Harrington. Keith was the Chief Operations Officer for Revolver Branding in NYC. He was a Veteran of the 1st Gulf Conflict having served in the British Army from 1979-2001.

He is the beloved husband of Lizzie. In addition to his wife, Lizzie, and his mother, Marina, Keith is survived by his loving children. Also survived by dear brothers, Peter Harrington (Sue) and Simon Harrington (Lorraine) and his father and mother-in-law, Leslie & Doreen Elizabeth Massey.

In lieu of flowers, donations may be made in Keith’s memory to the Wounded Warrior Project, Inc. www.woundedwarriorproject.org

Keith, you had an infectious enthusiasm, and an enviable devotion to those you liked, and loved.

You silly bugger. You top bloke.

Thinking of you all.