In a Season of Giving…

…some big givers…when asked for a favor…or over a career.

When a customer asked the owner of ASAP, a mailing and shipping store on East Prospect Avenue in Mamaroneck, if he would be willing to donate the shipping and handling fee of two heavy boxes of books 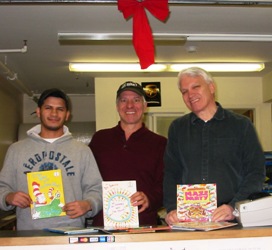 The books were donated by her children Ari and Bloeme Daly ( 7 year old twins that attend Daniel Warren) and by the United Nations School (UNIS) library.

He packed the books with a smile.

All the books are going to a learning center in Rishikesh, India that will educate the street children .

Truike Boekholt-Daly ( a local teacher) has been working with these street children during her summer break and together they made artworks that she and another local volunteer and neighbor Nina Daryanani turned into art cards that have already raised more than $2000.

Now that is something to smile about during the holiday season…

For more information about the project visit: www.childrenoftheganges.com

Allen Hubschman, former coach at Rye Neck High School, has won the Charles Gronberg awared for community service from The Old Timer’s Association.  The award was presented on Dec. 16th at the Veterans Post in Flint Park. 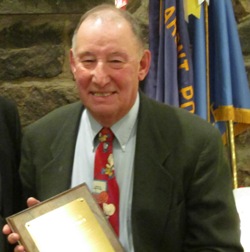 Allen graduated from Springfield College as a two-sport athlete, playing football and baseball. He began his coaching career in Wayne, New Jersey.  After eight years of coaching and teaching Physical Education at the local high school, he sought a smaller environment where he could make a greater impact on kids.

Luckily for Mamaroneck, he landed at Rye Neck High School in 1966 and started teaching physical education.  In his second year, he became Athletic Director and continued teaching Physical Education and coaching for 28 years.  His resume includes coaching nearly every sport, but he is best remembered for his basketball teams, which had a winning record for all but two seasons. Later, he coached basketball at Mercy College and was involved with Harrison recreation and CYO leagues.

He will be remembered for his passion and always wanting what was best for the kids.  This was epitomized one summer in the early 70s when Rye Neck went on an austerity budget that did not finance any sports or extracurricular activities.  Coach Hubschman gave up his summer vacation to raise money so the kids could have sports and other extracurricular programs.  He organized the student athletes to go door-to-door selling greeting cards, which helped generate enough funds for Rye Neck High School to have sports and the other extracurricular activities.

Upon his retirement a plaque was placed in the Rye Neck gymnasium foyer signifying his contribution to the school.

The Old Timer’s Association, founded by Charles Gronberg, has been presenting this award for community service since 1975.  Each year the association also recognizes a graduating female and male student athlete from both Rye Neck and Mamaroneck High Schools.  Its membership includes almost 200 members from the Mamaroneck and Larchmont communities that have a passion for local high school athletics, both past and present.  For more information about the “Old Timers” Association of Mamaroneck-Larchmont, contact Skip Pennucci at 424-1823 (or visit him at Village Paint in Larchmont)