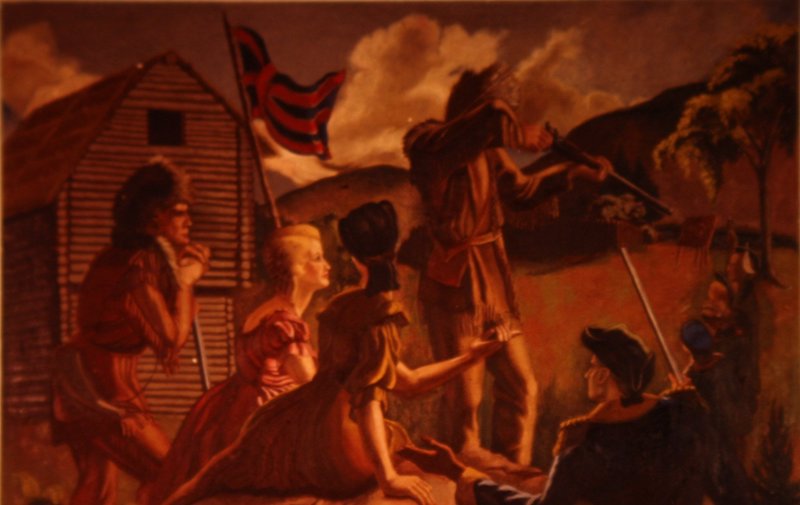 Several readers have contacted theLoop hoping to publicize, and perhaps encourage reconsideration of the Mamaroneck Board of Education’s decision to allow historic murals painted in 1940 to be destroyed.

The Board voted January 18 to approve construction of a Design Lab that would result in the destruction of 2 murals in a cafeteria, including “The Shooting Match,” seen above. 5-6 remaining murals will be buried behind new walls.

Five of the murals depict scenes from James Fenimore Cooper’s Leatherstocking Tales, five novels published between 1823 and 1941.  The other three portray Cooper and his life.  Cooper lived in Mamaroneck for several years.
The District is planning to construct the Design Lab, which will include a metal shop and other facilities, in space that was a Junior High School cafeteria (before the existence of Hommocks Middle School), where the murals were displayed, and more recently a suite of classrooms for the Apple Program.
“To meet the plan’s design we would have to repurpose the space which included murals that were pained by Yale University students in 1940,” Superintendent Robert Shaps said at the Board meeting.
The Board began consulting with the Mamaroneck Historical Society in July 2020, which was given the option to remove the murals at its own expense. An Art Conservationist was brought in to assess the murals, which, the Board says, were not of significant value.
Among the options considered were moving the murals, donating them to Yale Art School, or to a museum, such as the Fenimore Museum in Cooperstown.
(It would cost) between $100,000 – $150,000K to remove the murals so as we’ve gone forward, it is my recommendation that we move forward to remove the two murals critical to the projects, digitally archive them, and we move forward to cover the remaining murals to protect them,” Shaps said.  Digital images of the murals will be created.
“The loss of this invaluable asset owned by the community is immeasurable,” the Historical Society posted on its website.

“In 1934, students in the Creative English class chose the important scenes from Cooper’s novels and raised funds over several years to have them painted. Local professional artists James Allen, Paul Jennewein, and Beth Sutherland connected with the Yale School of Fine Art, the most prominent art program in the country,” according to the Society.

“Five Yale artists were awarded the commission and were supported by eminent mural painter, Eugene E. Savage. The PTA arranged for artists to live with local families during the project and installation.”

Construction will begin in March. More information on the murals can be found here.

Polly Kreisman
Polly Kreisman is the Founder and Publisher of the Larchmont Loop, an actor, and a 15-time Emmy Award winning former television reporter. In New York she worked at WPIX TV, WWOR TV, WNBC TV and NY1. She lives in Larchmont, has twins in college, and two badly behaved dogs.
Facebook
Twitter
Linkedin
Email
Print

Let me see if I have this right. The Mamaroneck UFSD has an enormous budget, well over 140,000,000. The district is top heavy. The cost of so many administration employees is quite large. Why can’t the funds to preserve/move this art be carved out of the current administrative budget? Surely with a budget so large, private/public partnerships that provide services and items to classrooms at no cost, they can eek out the funds necessary.
Sadly, why am I not shocked by this new turn of events?

I am appalled that the school district is going to destroy and/or cover up these murals. I remember the first time I saw them thinking how cool they were. I am attaching a link to an article about other murals that were recently uncovered in a small town in Washington state. This could be the high school murals in the future if go ahead with what is planned.

I think it’s a shame. Another bit of history gone. We have a tendency in this country to not value anything. It’s old so just tear it down.

Send the pictures to the Fenimore Museum which was his home in Cooperstown NY instead of destroying them. The museum will keep them safe.

It is an outrage to consider destroying the the magnificent James Fenimore Cooper murals in Mamaroneck High School. Cooper was America’s first great author and Mamaroneck High School should be honored to respect American literature and heritage. As an alumnus of MHS, I find this cultural desecration a shameful deed. Please reconsider.

I loved those murals! They transported me from the chaos of 7th grade lunch in the cafeteria. Fascinating to learn the history. I always assumed they were part of the WPA project.