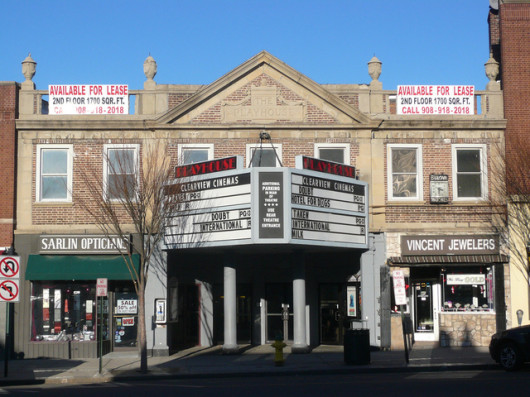 Mamaroneck Village Trustee Andres Hallstrom writes concerning the possible closing of the historic Mamaroneck Playhouse, now a movie theatre run by Bow Tie, and the creation of a condominium:

Representatives from Bow Tie have met with various Village officials, including myself. Bow Tie represented to the Village that they would rather keep the space as a movie theater, but the economics just are not working. The Playhouse has to compete with bigger and more modern movie theaters in Port Chester, White Plains, and New Rochelle, and the Playhouse is losing money every month since Bow Tie bought it. Bow Tie had planned on upgrading the Playhouse, but they could just justify the cost in light of the low use. I went to a movie there last Sunday (before finding out it was closing) and the theater was maybe 1/10 full.

We suggested turning the Playhouse into something akin to the Jacob Burns Center, and Bow Tie said they had considered that, but it would not be economically feasible due to the proximity to Jacob Burns, and that movie distributors would not distribute the type of art-house movies Jacob Burns shows to two theaters so close together. Upgrading to a deluxe dinner-and-a-movie type of theater was likewise unfeasible. We also suggested bringing back free movie Tuesdays, but in their experience that lost even more money that was not made up for in concessions, etc (people who went to free movies tended to either sneak in candy from other stores, or simply go without).

While I cannot ensure the sentiments were genuine, Bow Tie expressed sadness at having to close down a movie theater, as they are primarily in the movie business and have been so for four generations. Bow Tie also has a real estate division, and it was indicated that division would retain ownership and control of the proposed building. That is to say, the proposed new building would not be “flipped” after it was completed.

The proposed plan is apparently zoning compliant. That said, it would, of course, have to go through the various land use boards and related processes, just like any other proposed development of its type. That process is dictated by State and Village Law, and is not something the Board of Trustees can interfere with. Demolition of the current building is an administrative process that requires various permits from the Building Department.

It is not possible to force Bow Tie to continue operating a movie theater against their will. It is sad to see it close, but businesses come and go, even those that have been open for decades. Village staff have been asked about the possibility of a historical designation, and we are awaiting an answer. As I understand it, such a designation affects mostly the outside of the building, and such a designation would not force the building to be kept as an operating movie theater. I urge you all to think, and discuss, what you would rather have in that space, a shuttered movie theater, or something else. Public input is an important part of the Land Use process, and a time will come for your voices to be heard regarding proposals for this space.

JVM – thank you for digging up the link to the renderings of the condo plan that Bowtie clearly had planned, duping the Village, officials and everyone they met, lying about their real intentions all along. The Bowtie Cinemas and Bowtie Real Estate business have clearly shown they should not be trusted. All other theaters are clearly in danger. Wishing that we all sought to do business with honest business people.

The fact that Bow Tie outright refuses to respond to anyone about this — whether it be residents or the media — is very telling IMO.

“…it would not be economically feasible due to the proximity to Jacob Burns” say the Bow Tie people.
“Proximity” to Jacob Burns? How many times have we decided not to go to the JB for a movie we wanted to see because of the distance?
Jacob Burns services northern Westchester; we are in southern Westchester. The educational opportunities afforded by the Burns ‘labs’ would also be welcome in this community. This response by Bow Tie is as disingenuous as the others reported in this letter.
And as far as movie theaters not always being filled, movie theaters all over the country are experiencing that–have you noticed? and most remain open. Ideas for an expansion such as the one on the Jacob Burns model are excellent.
Local people do not want the heart of their village, its small town commerce, ripped out for a project which benefits only the profits of a large impersonal corporation.
We see that sort of development all over the country as small towns are swallowed up by Walmarts.

It’s already too tough to park in the village. No movie theater means more parking availability for the restaurants. Yes, I hate to see it go, but between the new state-of-the-art theaters, home streaming, and the lack of parking, it is no longer viable.

No offense, but if you think parking will get better instead of much worse with 30 new condos right on Mamaroneck Avenue, I think you might be mistaken….

The Village will require 1.5 spaces per unit. The owners will not be parking on Mamaroneck Avenue. In contrast, a hot movie can bring in a couple of hundred cars.

But those 30+ condo owners will all be getting daily deliveries, having friends and families with their own cars and parking needs visiting (also daily), not to mention babysitters, nannies, cleaning people, etc. If you think there will be no negative parking impact with these condos I think you are being way too optimistic.