A plan to raze a Larchmont Manor mansion built in 1896 and develop up to four new homes on four lots on the current property has been met with community outrage and swift local response.

The iconic property at 40 Ocean Avenue in Larchmont, known as “The Orchard,” is the former home to Miriam Curnin, who served as both the Village’s Mayor and the Chairman of the Board of Trustees of Larchmont Library.

Larchmont resident Theresa Viti Finck, who has been working to stop a 4- unit subdivision at 5 Vanderburgh Ave. in Larchmont,  writes, “Developers are well funded, well informed and will push our zoning laws to the limit. We need to make a strong showing to our village officials that we expect and will support their vigilance in approving and monitoring construction projects.”

The Vanderburgh property is zoned R-5, and plans are still being discussed for the four new houses there which presently comply with Village Code. (This will be again discussed at the next Planning Board Meeting in the Village Courtroom Dec. 7)

A petition drive begun by the group savelarchmont.org, organized by a committee of residents, reads,

“In the last few years, we have all watched as Developers have targeted Larchmont, tearing down old, single-family homes, subdividing the lot and installing several new Development houses. Decisions like this are ruining the character and charm of Larchmont, and eventually impact the overall value of all homes in our community.”

Save Larchmont has encouraged residents to email or call the Village to say that present Village law is not adequate to protect the Village from over-development.

This week, The Village Board of Trustees responded on the village website, announcing that the Board will begin reviewing Village Code.

“The Village has received many messages from concerned residents about the increase in tear downs and subdivisions in the Village,” the Board writes. “Each application is subject to the jurisdiction of the Village’s independent land use boards, Planning, Architectural Review and, if necessary, the Zoning Board of Appeals….  The Village Board is initiating a review of its Village Code, which includes the local law on zoning, site plan review, demolition and subdivision of land.

Mayor Anne McAndrews told theLoop, “We have engaged a planner for the overall study of the Zoning Code of the Village.”  The last comprehensive review was over ten years ago.

The Town of Mamaroneck, a separate jurisdiction, is considering a moratorium on similar projects until further study is done.

A neighborhood meeting for nearby residents  Sunday 12/6 at 4:00 at 10 Walnut Ave will be held to discuss the proposed development at 40 Ocean Avenue. 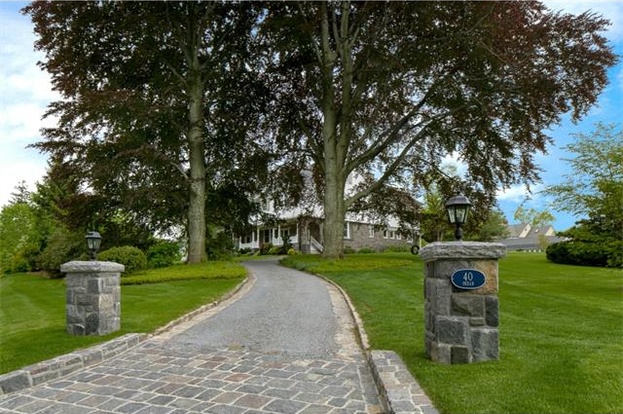 The Village Board is perfectly capable of regulating zoning, responding to the outrage, and seeing to it that homes such as these old homes are protected. Larchmont has been changing dramatically, along with the Town of Mamaroneck, because of lax regulations and the required Land use andArchitectural Review Boards, etc. have been rubberstamping all the new home designs.
The central issue is that we’ve paid hundreds of thousands of dollars — millions in many cases — to live in a community we chose because of its character, charm and beauty. Homes were built to the proper size for the size of the property, creating a village and Town of gracious homes with appropriate room for landscaping, which in turn, set off the homes.
With these new homes, McMansions are being built on these postage stamp properties, way oversized, precluding any gracious space around the house, and with little character. They’ve lost the
charm of the lovely old well-landscaped and properly sized homes for the property.
With the Ocean Avenue home, it’s a different story….Here’s an historic home, set on a beautiful, large
piece of property in an old, gracious neighborhood full of character. It’s neighbors paid millions for their homes, choosing the area they wished to live and invest in because of its appearance. Building four houses on that property would lower the value of the entire area.
However — the one point which has not been mentioned, but which could save it, is that it’s a viable historic home! Contact SHPO (State Historic Preservation Organization) immediately in Albany, and see if it can be listed on the National Registry…or the State’s. It should be eligible — It hasn’t been moved (which is the problem with the DeLancey-Cooper House, moved from up Heathcote Hill 100 years ago), it hasn’t had major changes, in its 100+ years, and is in good condition. Someone should contact SHPO NOW…request an application immediately, and request that SHPO give a very quick response (explain why). Contact Bill Krattinger —- He responded and came down to visit.
In the meantime, the Village Board should do as the Town is doing — put a moratorium on all development until all the parameters have been thoroughly studied, and regulations and zoning changed to protect Larchmont’s unique beauty and character. The Board owes its residents at least that much!

This is a trend that has to be stopped. Hopefully this grand home can be saved! I have a ridiculous 6,00o sq ft. house -(new construction) on my street.

This would be the end of Larchmont as we knew it .