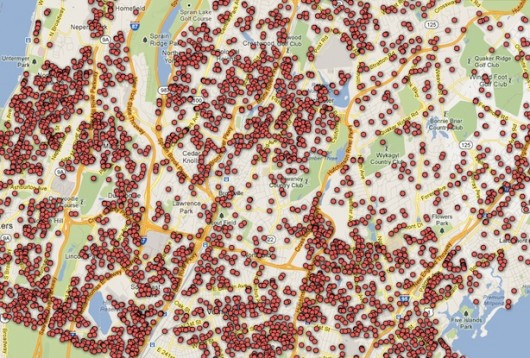 WHITE PLAINS— You may have heard the Journal News relented– and took down the interactive map with the names and addresses of Westchester residents with pistol permits from its website.

The president and publisher of The Journal News Media Group,  Janet Hasson wrote on the LoHud’s Facebook page:

sponsored by
To our readers:

In the wake of the Sandy Hook shootings, The Journal News thought the community should know where gun permit holders in their community were, in part to give parents an opportunity make careful decisions about their children’s safety.

The Journal News mapped the public database of permit holders, placing a dot on the address of every permit holder in Westchester and Rockland counties and providing the name and street address of each holder. The dots conveyed a powerful message: gun permit holders are everywhere in our counties.

But public reaction to the posting of names and street addresses was swift and divided. Many in the community expressed their gratitude for The Journal News’ decision to make the information available, but permit holders were outraged at what they considered to be an invasion of privacy. Gun owners from across the country vocally conveyed their anger and accused The Journal News of having exposed permit holders and non-permit holders alike to the risk of burglaries and other crimes. Hundreds of threats were made to Journal News staffers.

So intense was the opposition to our publication of the names and addresses that legislation passed earlier this week in Albany included a provision allowing permit holders to request confidentiality and imposing a 120-day moratorium on the release of permit holder data.

Today The Journal News has removed the permit data from lohud.com. Our decision to do so is not a concession to critics that no value was served by the posting of the map in the first place. On the contrary, we’ve heard from too many grateful community members to consider our decision to post information contained in the public record to have been a mistake. Nor is our decision made because we were intimidated by those who threatened the safety of our staffers. We know our business is a controversial one, and we do not cower.

But the database has been public for 27 days and we believe those who wanted to view it have done so already. As well, with the passage of time, the data will become outdated and inaccurate.

COMMENTS ARE WORKING AGAIN! Thank you to those readers who let us know about the bug in our system. It was awfully quiet out there.
–editor

0
Reply
Previous articleComing Up: Artists To Raise Funds to Restore Manor Park
Next articleShe Did You that Flavor!