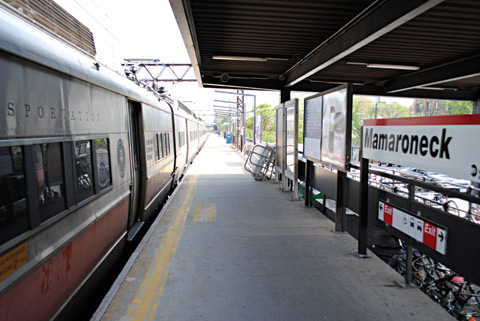 The tragic death of a man killed in a hit and run accident and a gun arrest at the Mamaroneck Train Station top the July blotter as reported by the Village of Mamaroneck Police Department.

Man With A Gun Arrested at Mamaroneck Train Station

A man with a gun was arrested at the Mamaroneck Train Station shortly before 6 p.m. on Tuesday, July 27.  44 year old Menfil M. Barrio of New Rochelle was arrested after police received a 911 call reporting a man with a gun. Village of Mamaroneck police officers and detectives discovered the suspect sitting in the vestibule of the Halstead Avenue side of the train platform. “The gun, a semi-automatic pistol, was not loaded and he was not threatening another individual,” says Lt. Mark Gatta.  According to police, during questioning the suspect lied about his name to prevent himself from being identified. Ultimately, the suspect was positively identified by his fingerprints.

Barrios is charged with Criminal Possession of a Weapon 3rd Degree, a D Felony and False Personation, a B Misdemeanor. The police spokesperson says, “The charges are not eligible for bail and Barrios was released on his own recognizance pending a future court date.”

44 year Old Noe Cortez Duran of Mamaroneck was killed in a hit and run accident on Wednesday, July 21 at the intersection of Waverly and Mamaroneck Avenues. At 11:20 p.m. Village of Mamaroneck Police received a report of a pedestrian struck. Upon arrival officers immediately rendered aid to the victim who was taken by EMS to Westchester County Medical Center where he was later pronounced dead.

Detectives arrested Jerry Barrios, a 23 year old resident of Elmsford, says Lt. Mark Gatta of  the Village of Mamaroneck Police. Barrios is charged with Leaving the Scene of a Motor Vehicle Accident Resulting in Death, A D Felony. He is released on $5000 cash bail pending a future court date.

Cortez Duran, worked as day laborer and was a beloved member of the community. A public memorial organized by the Community Resource Center will be held Friday, July 30, 7 p.m. at the site of the accident, Waverly and Mamaroneck Avenues.  Donations are requested to cover the cost of sending his remains to Mexico. Click here to donate:  Go Fund Me for Noe Cortez Duran

July 25, 2021 Dispute, Center Avenue – Units on scene observe several individuals and advised the situation was under control and as a misunderstanding between two people which was quickly mediated.

July 23, 2021 Dispute, Fenimore Road – Police respond to a dispute between a customer and a worker. Situation mediated.

July 13, 2021 Dispute, Mamaroneck Avenue – Unit reports dispute over misplaced item that was found and matter was resolved without further incident.

July 9, 2021 Dispute, Mamaroneck Avenue – Caller reports yelling in the hallway and someone kicking a door down to one of the neighbors’ apartments. A witness at the scene told police that the door that was kicked was down by the person residing in that room. That person was gone upon police arrival.

July 6, 2021 Larceny, Prospect Avenue – Caller advises a man wearing a white tank top and tray shorts went onto his property, removed a bicycle and when confronted he dropped the bike and ran off.  Canvass of the area was completed with negative results.

July 4, 2021 Fight in Progress, Harbor Island Park – Unit reports fight in progress. The situation was brought under control and two parties were escorted off the harbor island grounds.