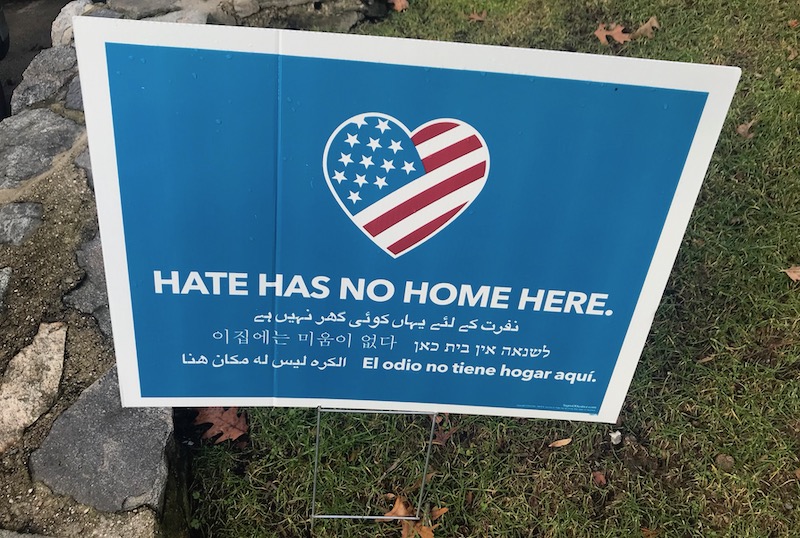 According to several reports, Larchmont resident and Proud Boys founder Gavin McInnes wants people in town to take down yard signs that he reportedly believes target both him and the far-right group he founded.

In a “Dear Neighbor” letter written by McInnes, and obtained by both the Daily Beast and the Huffington Post, McInnes writes,

Today I passed by your house, and the homes of many of our other neighbors in Larchmont, and was struck by the “Hate Has No Home Here” sign on your lawn. As an immigrant and the head of a multi-racial family that has made this special village our home recently, I wanted you to know just what your statement of principle and courage means to me – because I know more than a little bit about [sic] you’re responding to.

“McInnes, the founder of the violent, misogynistic street gang known as the Proud Boys, found a safe space in Larchmont, a quaint, upscale village in Westchester County,” writes a reporter for HuffPo.

“The beautiful waterside community just north of the big city insulates McInnes’ wife and three young children from his daily life as an extremist gang leader who incites violence and espouses hate on any social media platform that’ll accept him.”

You may have heard that I am the leader of a hate group called the Proud Boys,” McInnes writes. “Everything about that rumor is false.”

After those attacks, a Larchmont resident suggested the lawn signs as a form of protest against McInnes and the group he created.

Hate certainly has no place here, and like you I am committed to keeping it that way!” McInnes says in his letter.

“If you’re so tolerant, then put up a fucking sign in your yard, too, and stop being so narcissistic as to think that this is all about you,” one resident told the Huffington Post.

On Friday, McInnes used his podcast to address the signage issue.

“If you have that sign on your lawn, you’re a fucking retard,” McInnes said.

this is ironic. my boyfriend and i went for a night walk down larchmont avenue over the summer and were called the ‘N’ word by a group of teenagers driving in a car. kind of ironic how these are the children of the very people who so proudly flaunt the signs on their lawns. Mr. McGinnis has all the right to his beliefs, just because they don’t line up with yours doesn’t mean you have to single him out.

Those seeking to “drive out” conservatives are the real force of intolerance today.
Gavin McIness is, in my opinion, being caricatured by some who really seek to shut down debate on anything right of left-of-center.
The Southern Poverty Law Center is defining “hate speech” as anything not pro Open Borders/blanket Amnesty for illegal immigration or anything that endorses the virtues of Western Civilization.
The “gang related attack” charges were from a very ambiguous situation in which Antifa “protesters” instigated violence, and the police essentially arrested members of both sides for “gang violence.”
Whatever your views on immigration, or Western civilization, it seems to me that those seeking to enforce uniformity of views, and shut down opposing views, are the greatest threat to our basic freedoms that we now face.

We must stick together and drive
Scummy and conservative supporters out of our lovely peace loving area.

Leave private citizens alone in Larchmont. Doxing people in any form is shameful, Larchmont is much better than that. My family has lived in 10538 for three generations. There are many prominent people calling it home and going after a resident for any reason is a terrible blemish, please stop it.

Well put Saul, thanks for the level headed thoughts.

What thin skin this “proud boy” has. Time to grow up!

His response certainly says it all. He needs to work on his PR skills.

0
Reply
Previous articleToday’s Snapshot
Next articleComing Up: Books Come to Life at the Mamaroneck Library – Jan 12