Foundations to Pay Half of Proposed New Jefferson St. Parking Project in Larchmont 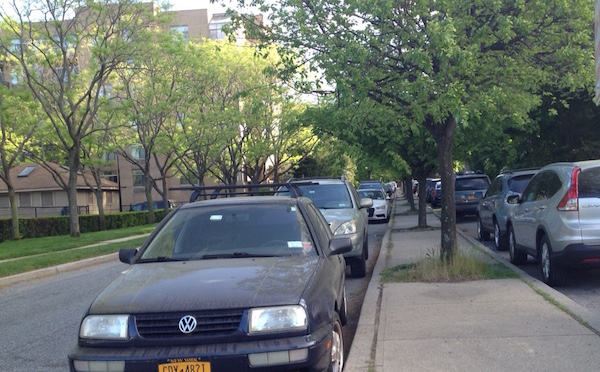 A longtime Larchmont resident who has been active in several local land issues says the Town of Mamaroneck’s proposal to re-engineer New Jefferson St. in Larchmont, by creating three lanes of parking, instead of two, as well as move the median, will “fit perfectly well in the present paved area of New Jefferson Street.”

Ralph Engel, an attorney, is on the Board of Directors of two Foundations that are putting up to $90,000, or half, the funds needed to complete this project.

“Both grants were unanimously approved, for the purpose of providing more low-cost parking, and more handicapped parking, in an area with many older residents,” writes Engel. “Both foundations were totally funded by bequests.”

The Foundations are the Morris S. And Florence H. Bender Foundation, based in Greenwich, Ct., and the Virginia A. McGuire Foundation of Pennington, NJ.

New Jefferson Street is presently a two lane road, with a tree-lined median down the center, that provides access between North Chatsworth Ave. and Myrtle Blvd., and is used as an access to the I-95 South on-ramp. According to the Town website, “Under the proposal between 20 and 30 new parking spaces will be created through a reconstruction of the street’s center median and various other improvements.” This will reportedly include two handicapped spots. However on the concept drawing for the project it says “the end result is a net gain of 19 parking spaces.”

“This is especially good for residents of 16 and 21 North Chatsworth, and on Washington Square,” where Engel lives, “which has only one handicapped spot for numerous handicapped drivers who live there,” he writes to theLoop.

But Fred Cuccia, President of the Board of the Carlton House, a condominium bordering New Jefferson Street, says, “although we believe that there is currently ample parking for all neighborhood residents, we have no objection to the Town providing additional parking. We merely object to the proposed plan on New Jefferson. We believe there are other options that are less expensive and less disruptive.”

Engel says The Bender Foundation was the “key funding source for the renovation of the playground in Larchmont’s Pine Brook Park” about three years ago. It also helped to fund a sidewalk leading to the train station, on Chatsworth Avenue, in 2012, and has funded other local projects.

A Public Hearing to discuss this project will be held Wednesday, May 27th at 8:00 pm in the Mamaroneck Town Center Courtroom at 740 West Boston Post Road.

The concept drawing for the project can be viewed above, or in person at the Town Administrator’s office.

Ralph, I look forward to the meeting this Wednesday. I support making certain parking spots for handicapped. I do NOT support the ridiculous plan to screw New Jefferson Street. So, you need a spot – find one. My assumption is that you have one, or two, or three. Work with the rest of the people in the neighborhood. Stop pushing this B-S project that totally blows.

Ralph, stop with the mis-information, you are on the Town Board of Directors and should be disclosing this in your comments below. I appreciate you have a say as a resident, but you should be more professional as a board member.

Don’t bother to click the link under “it smells”, since almost everything on the page to which it takes you is wrong. The IRS has a web site about private foundations that tells things as they really are.

They should allow parking from 6PM to 8:30AM on Madison for FREE with WS stickers. There are enough spots there to stop the ruining of New Jeff St. and making the st. very dangerous. Its going to be way too narrow after the change, and the car doors open into traffic, not the curb, Poor plan. And if we have snow like last year? good luck.

The net is only 19 spots and there will be a major lawsuit if the town thinks this is a good deal, There are over 19 free spots on Madison every single night. PARK THERE!

How is a handicap person going to benefit from parking on New Jefferson? If Mr Engel knew the area he would see that it is blocks away from Washington Square and there is a hill inbetween – that is not considered accessible.

0
Reply
Previous articleThis Weekend in Larchmont, Mamaroneck and Nearby
Next articleComing Up: Comedy Show , New Rochelle- May 21