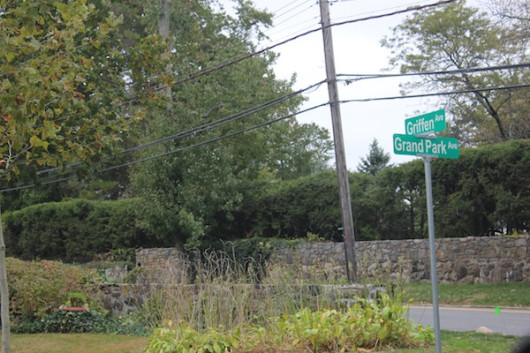 By the 1870s, the northeastern portion of the town of Mamaroneck remained largely undeveloped. Acclaimed Midwestern real estate developer Andrew Wilson, Jr., who was known at the time for planning several large developments in Rye, bought 2,000 acres of northwestern Mamaroneck with plans of building his greatest development project yet: the ambitious community of Grand Park. The very project that would prove to be his undoing.

Wilson’s plan had largely taken shape, at least on paper, by 1870. Its elliptical circumference was to be bounded by a broad, tree-lined Esplanade and bisected by the grand Wesleyan Avenue. It was even intended to include a premier university associated with Columbia College (now University), “analogous to the English Oxford,” pronounced Wilson. To connect Grand Park to the outside world, a new road was built from the Boston Post Road in Mamaroneck. The road was christened “Grand Park Avenue.”

Not long after a triumphant groundbreaking in early 1870 for the subdivision, work began to slow down. In fact, the lofty grandiosity of the project was enough to bankrupt Mr. Wilson in only several months. In September 1870, Andrew Wilson, Jr. attempted suicide, and died soon thereafter.

The massive lot that was once to be the setting of the grandest subdivision in America is today the setting of Winged Foot Golf Course. A small private road that bisects the golf course still carries the name Wesleyan Avenue.

I have wondered why it has different names at either end for years. Thank you for clearing that up!

A shame for Mr. Wilson, but lucky for us local golfers.