I’ve been covering the Con Edison lockout for NY1. I want your opinion on this.

3.2 million people pay Con Ed for utilities, including electricity and gas. That’s the entire population of some countries. Talks broke down between the Utility Workers Union Local 1-2, covering Westchester and New York City, and Con Ed management, when their contact expired at midnight July 1.

When the union refused, and would not guarantee not to strike if the contract was extended two weeks for more talks, the company locked them out and put managers in workers’ places out in the field. Many of these managers had been utility workers in the past.

Out on the picket line in front of Con Edison HQ on Irving Place in New York, the press was told of managers being severely injured, even killed, in one case, because they didn’t know what they were doing. These turned out not to be true. 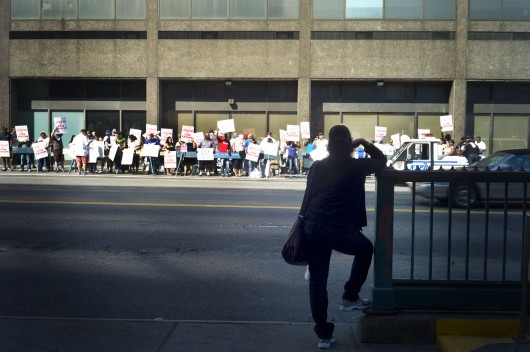 Here in Westchester, there were reports of bullet holes and possibly arrow holes in a Con Ed electrical cable in Armonk and a Con Edison worker was accused of reporting a fake gas leak in Yonkers.

Talks between the two sides continue.

What do you think? Are workers being short sighted and irresponsible (in a few cases) in a tight economy? Or are they among the last wave of labor rights fighters in a business culture dominated by corporate greed?

I think Con Ed’s offer was reasonable. When everyone is living longer and health care costs are exploding, it is somewhat clear that something has to give. Give the CEO a pay cut and lower rates…I’ve never paid so much for electricity in my life as when I lived out here.

Yes, give the CEO a pay cut and lower rates, but don’t make workers poorer when the company is thriving–those practices are what’s slowing the economy.
Taking down the buying and spending power of the middle class a few notches translates into general stagnation/recession.

Or cut wages for everyone and lower Con Eds rates, so all of the rate payers have more spending power.

The great majority of America has gotten pay cuts over the past few years…why are unions immune to this fact?

Do you really think Con Ed will lower rates?
I don’t see that as part of their offer.

I support the workers 100%. Con Edison is an example of the worst of monopolies, and unfortunately they supply an essential public need.

Despite their obscenely high rates, they invest little or nothing in improving equipment and services so that you can be sure of power outages with every major storm, the occasional manhole explosion in Manhattan and very slow recovery time.

These defects are all the fault of management who focus little attention on the quality of life of their consumers.
In contrast, the workers for Con Ed that I and my neighbors have known are dedicated, professional and giving of their best effort.

Every customer of Con Edison needs to support these workers, especially now. Would that we consumers had some way to leverage power against the abuses of this greedy corporation.

You’re not the only only missing this major point:

5,000 mgmt employees are not replacing 8,500 union. They are only covering emergencies and not doing any maintenance work. They have also suspended all meter reading and closed all walk-in centers (because they do not have the manpower).

It’s only a matter of time before this lack of maintenance and patchwork repairs catches up with them.

ok… from the top…

1. The workers were willing to stay on the job and negotiate further. The management locked them out. That sounds to me like old-fashioned union-busting, management playing hardball.

2. It’s a hell of a gamble by management. Where are they going to be if there’s *serious* trouble? A major storm, a cascade failure due to overload in heatwave? Will the workers just walk back on the job? Hell no, they’ll have to pay whatever it takes to get them to go back on the job, and like it.

3. ConEd sucks. I don’t mean that in a nasty abusive way, but really… I was born and raised in the Scottish Highlands. My dad was a lineman with the electricity company all his working life. So I know a bit about electricity distribution and harsh weather. I’ve spent ten times longer without power in 8 years in Westchester than I did in 25 years in the Scottish Highlands. And when I look at my bill, I find ConEd charging me (say) $100 for electricity – and $160 for delivering it!

I don’t care if they lock out or strike, as soon as I can I’m going to fire their ass and get my electricity somewhere else.

Well said, and with facts and information to back up your points. Thank you

they are locked out not striking…

@my2cents, they have 5,000 managers for 8,500 workers because that’s all they want to pay for. They need the 8,500 workers to keep the city’s system going. In my neighborhood alone, there was an overhead electrical fire that CE’s well trained managers didn’t show up to for an hour and a house was burnt, no loss of life, this time, thank God. Several managers have been injured trying to do their jobs. Who cares who made $11 million? When you claim you are trying to save customers money and are sincere, start with yourself, they aren’t asking for more money, they are asking to keep their benefits that was offered to them when they started working. You have employees there for over 30 years, who BTW, do their jobs otherwise there would be black outs every day. Very competent and hard working employees who are recruited from the best colleges to work for them. They can go anywhere, there are company’s all over who would take highly educated, hard working, and have a lot of experience. They put a whole lot of hard work and time into CE, not saying every single worker is great but what company can say that, none. How do you know how many people it takes to do the job, how do you know it only takes 2? BTW, get your facts straight, they didn’t strike, they were locked out…..DUH.

The first question I have is why does CE have 5,000 managers for 8,500 employees? If these managers can not cover for the 8,500 then who needs the 8,500?
Who cares that someone made 11million running the company, thats a customer issue not employee. Is the Union trying to say if someone else gets why not me? Want more money? Finish jobs faster, have the flagman really control traffic and get off their phones. 5 employees to the job of 2??
If the striking workers do not like the pay being offered go work elsewhere. They are striking because they know they cannot go elsewhere and get what they can at CE. Striking in this day and age is just plain bullying.

@my2cents – they were locked out, they DID NOT strike. All they are asking for is what’s fair. Maybe you should go to the Local 1-2 website to see what the real offer was that CE offered the union, not just the propaganda that the company is putting on its website to save face. These workers put their lives on the line every day to keep the electric running.

In this day and age when we are told that “cyber terrorism” is a real threat, and we are having record breaking heat waves, the old ways don’t work. In Norway they just sent a similar situation to BINDING ARBITRATION..and the workers are at work and the managers have to work it out with the workers and everyone is protected. What a concept!