Several Westchester communities along the Sound are officially in newly designated high flood risk zones where flood insurance rates have been rising along with sea levels. ( See our previous coverage.)

But in a bipartison vote of 306-91 on Mar. 4, rate increases for any current premiums under the National Flood Insurance Program, actually were limited by the House of Representatives. The limitations, which would greatly help homeowners, may be supported further as the bill moves to the Senate, the next step in the legislative process. In January, the Senate called for a moratorium on rate increases for several years.

A 2012 law required the Federal Emergency Management Administration (FEMA) to raise rates to reflect increased risks from storms such as Superstorm Sandy. Increases were supposed to offset the huge losses that the program has incurred. To date, the Congressional Budget Office estimates the program is about $24 billion in debt, and critics say this could get a lot worse with climate change and sea level rise over the next few years.

You can look up your current flood zone risk using the online FEMA look up tool; for example, the highest expected elevation of flood waters for the Manor Park area in Larchmont is 22 ft. and it is considered a high risk zone. 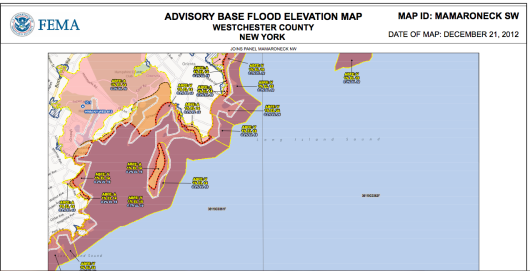