At Mamaroneck High School, alumni Vietnam Veterans were honored Wednesday along with  the 12 classmates who did not return from the war.

Sal Ticli, Class of ’64, Purple Heart Vietnam Veteran, organized the tribute in honor of his friend and classmate David Edward Porterfield, ’64. Porterfield was an outstanding varsity athlete in swimming, baseball and football. 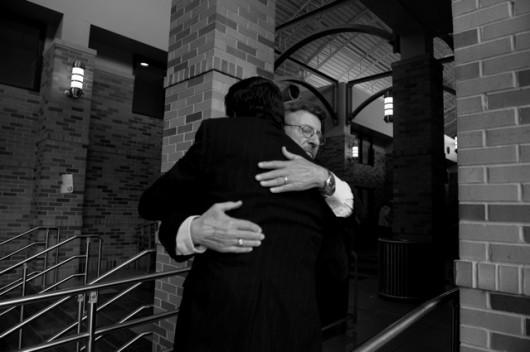 According to his Silver Star citation, “On July 18, 1966 during Operation HASTINGS in Quang Tri Province, Hospitalman David Edward Porterfield left his position of relative safety to administer aid to fallen members of his unit and was himself mortally wounded. He continued to render medical assistance to others until he succumbed to his own wounds.”

Sal had mistakenly received his friend’s medals from the government earlier this year and it started him thinking  how much he missed his friend and that there never was a proper Welcome Home to the Vietnam Veterans in this area.

He brought together hundreds of people from the Mamaroneck community at the Mamaroneck High School.  The high school football team came to present David’s sister, Pam McIntrye, with his retired jersey number. 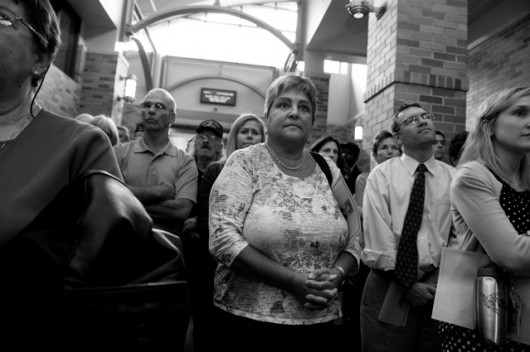 Russell Barber, who was with David the day that he died, drove hundreds of miles to attend the ceremony.

Just a note to early am. walkers in Larchmont Manor; could you please be more considerate of conversation levels please?!!!Just because you’re up and at ‘em doesn’t mean everybody else is.. never heard more high pitch/ volume yakking in my life( women , sorry, being the main offenders) also those using ear buds during phone convos don’t realize they’re Speaking volumes are inordinately loud! You’re not walking in the woods alone people!

If this is truly you, I will make a donation to the charity of your choice if you answer the long-standing question of, is it:

1. And them good old boys were drinking whiskey AND rye; or

2. And them good old boys were drinking whiskey IN Rye?

I never understood why it could be #1, as that is like saying “were drinking cola and Pepsi” (as in rye is redundant with whiskey).

I swam for Orienta Beach Club in the late 1950’s and early 60s. We often competed against Bonnie Briar Country Club and I remember the meets which always featured David Porterfield. He always won. He always beat our best guys. He was thrilling to watch swim and everybody respected him. I did not know him but I have that memory and when, year later I heard he had been killed I was pained in my heart that such a fine lad had been cut down so young . He was obviously always a team man and went to his death helping his team.Im 74 year old and have had a rich,full life as a singer and songwriter but hardly a day goes by when I don’t think of the guys I knew who died in that war.

Hi, Don. It’s a small world. All those times we’ve been together of late, and I didn’t know you swam for Orienta. Porterfield, indeed, was a stud.

It has been the greatest of honors to have completed the Mamaroneck Vietnam Memorial with 4 Showcases of the 12 at MHS and to also have two honored at Rye Neck High School! The 12tTH MAN TRADITION was also born and is stronger than ever with over 500 shirts distributed around the United States and the Greater Generations Foundation honored these 12 with a “ROLL CALL” on Hill 55! Also, a ceremony took place with a 12TH MAN shirts hanging down at the exact place Doc David Edward Porterfield was killed saving the many Marines from certain death. God needed Heroes and got the best! It was an honor to know they will be remembered after so many years of being forgotten. I didn’t want them remembered once twice a year, I wanted them remember whenever a Reunion passes through Mamaroneck on Saturday! It has been a great journey and I thank and shake the hand of the so many that supported my work for 7+ years now. I continue to speak publicly about the 12TH MAN and the Mamaroneck Vietnam Memorial and to the families of the 12, thank you so much for being that rock I needed in putting and completing this Memorial. God Bless All of You and God Bless America! Semper Fi!

Recently there was a memorial service in D.C. for Vietnam vets that died due to injuries or medical issues directly connected to their service in Vietnam. These vets died after their discharge dates, not while in Vietnam. One such was Ed Purdy from Mamaroneck. He graduated from Rye Neck High School (64 or 65?) and died of esophageal cancer due to repeated contact with Agent Orange while in the Marines. It reminds us of all the service people who carried the issues of Vietnam long after they came home. Ed always felt exceptionally blessed that he was able to come home when so many weren’t so fortunate.

Many thanks to Sal et al who honored Dave, John Batterson, and others who gave it all.. We learned how great America was, at MHS, and willingly contributed to her honor when called upon… It had nothing to do with the cause, That was America’s big mistake in not honoring our return…

I played Little League baseball in Mamaroneck (Hughes Tigers) with Dave. He was a star but a very humble guy. I admired him. John Batterson was a neighbor on Manor Lane in Larchmont. I think of John and Dave often.

I remember the afternoon…sitting on the bleachers, watching in the distance a touch football game, Dave approached and gave me a look that penetrated my soul: “I’m going Mac….”

Very sorry I missed it. Thanks Sal Ticli for putting it together! Jack

So good to see that they are honoring Vietnam Vets who gave the supreme sacrifice in a “conflict” that Americans wanted to ignore.

As a former Mamaroneck resident, who also served as a Corpsman with the Marines in Nam, I am so happy to see Mamaroneck HS honor Dave and the 12 others. Dave was one of the best I knew and was a friend to everyone. His death so many years ago hit all our friends hard and he was one of the main inspirations for me becoming a Corpsman with the Marines too. I would like to have talked to students who attended the ceremony to hear their thoughts when they heard Dave’s story and learned that one of their own alumni was such a hero and a great guy, Semper Fi Doc. I would like to especially thank Sal Ticli for all his efforts in organizing this. Great job Brother, Proud of you.