An Emerging Mamaroneck Novelist and her Creatures 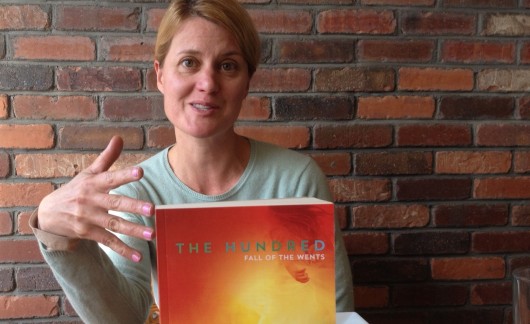 The Hundred by Jennifer Prescott

Jennifer Prescott has always had a great imagination (Millions of years in the Earth’s future, humans have long vanished from the planet) and has always been a really good writer (Aarvord’s bulbous eyes, which sat atop his head on short stalks, swiveled quite independently of one another to assess his next move.) Not to mention some hilarious stories in theLoop several years ago.

But with a job, three little boys and limited patience, “I got tired of waiting around for permission to share the story,” so she has self- published her first science fiction fantasy novel for young adults, The Hundred.

Jennifer says that after putting her children to bed, she wrote at night. The Hundred is already a top seller at Amazon in the science fiction category.

The Hundred features Wents, creatures descended from flowers, and Efts, humanoid-like creatures with scales that time travel to discover human beings. And there’s a lot more.

Although The Hundred is written for readers 10 and up, Jennifer says it’s the type of classic story that can appeal to all ages. The book has been sighted in the hands of  kids in the Rye Neck School District already.

She said she often receives purchased copies via her sons’ backpacks, which she then signs and returns to school.

“The greatest pay a writer can receive,” she says, “is hearing that someone, especially a child, loved the world you created and is eager for more.”

The Hundred is available in paperback and Kindle.