Within a few hours drive of most Westchester towns, there used to be hundreds of animals like the golden eagle, sea turtle, or short-nosed sturgeon that are now listed by New York State as threatened, endangered, of special concern, or even extinct. Their disappearance is the subject of a stunning pottery exhibit at the Clay Arts Center in Port Chester, on view until November 11. 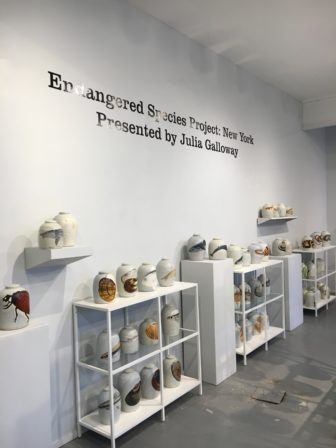 Called “The Endangered Species Project: New York,” it’s presented by the painter/potter, Julia Galloway who aims to raise the visibility of disappearing species, in her words, making “the unseen, seen.” Galloway has painted 288 urn-shaped pots with lovely, detailed images of each of the 288 listed animals, showing their common names along the base.

The urns are displayed on open shelving so viewers can walk between and among them. They are on a scale traditionally used to hold ashes from cremation–some smaller and some larger. Although they do not hold any remains, the urns work as a metaphor for the shocking destruction of so many species and their habitats in our area. 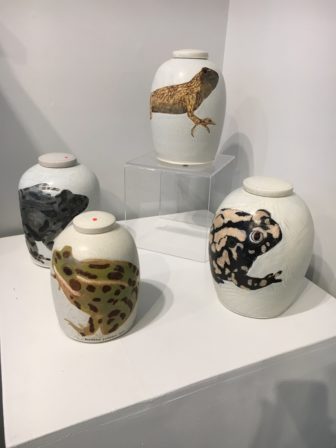 Galloway, who is a ceramics professor at the University of Montana in Missoula, got her first solo show at Clay Arts in 1998 and wanted to return to the New York  center, which has hosted two earlier shows for her.

She researched several species lists for the project, including the the New York National Heritage Program, the New York State Department of Environmental Conservation, the U.S. Fish and Wildlife Service, and the registers of the International Union for Conservation of Nature ( IUCN). 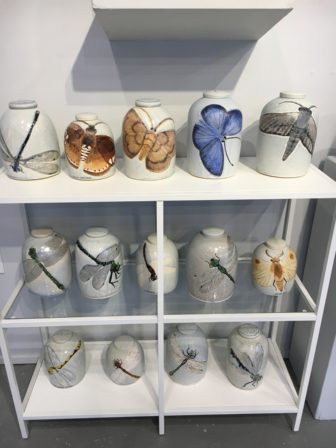 The exhibit is free to the public and the urns are for sale. Some of the proceeds will be given to the Westchester Land Trust.