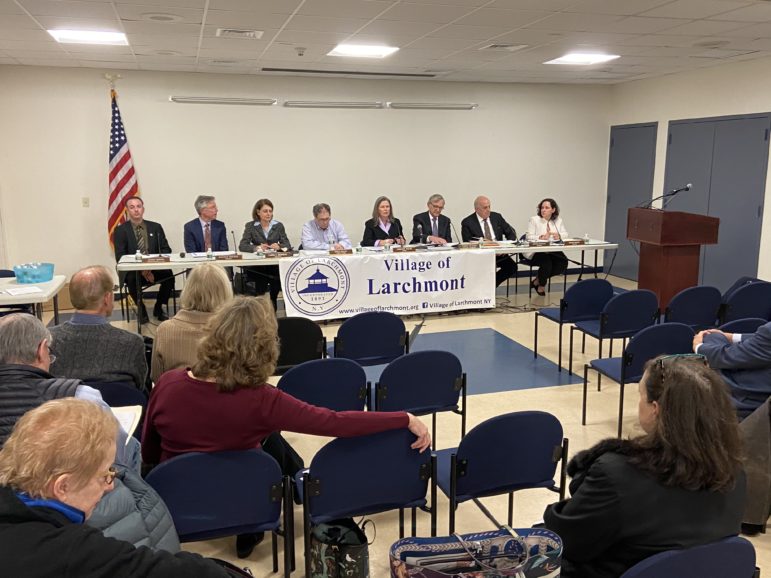 The prospect of new development in Larchmont’s business district moves one step forward as the Village Board of Trustees unanimously voted to pass a zoning amendment.

The move clears the way for the Rye-based developer, Elk Homes, to submit a new proposal to build Centro Larchmont, a multi story commercial and condominium complex to be built on Chatsworth Avenue. In sharp contrast to previous pubic hearings, only a very sparse group of residents were in attendance.

The Centro Larchmont project was first proposed in 2019 as a five story building with 26 luxury condominiums, street level retail space and parking deck.

In November, after hearing residents’ concerns over building size and the possible impact on traffic and schools, the Village Trustees decided to hit the pause button. Elk Homes officially withdrew the development proposal while village officials re-worked the zoning changes.

Mayor Lorraine Walsh outlined the latest zoning revisions which include “a height allowance of four stories and a potential for a partial fifth story.”

As Mayor Walsh explained in a letter last year, the zoning change simply enables development but the actual approval is very long process with many more meetings of the planning committee, Village Trustees and future public hearings.

Now the ball is the court of the developers.  Elk Homes developer Gary Hirsch said, “We look forward to working with the village and the community to bring a project that will really revitalize the business center.”

Syrette Dym, a Wendt Ave resident who has expressed concern about the project says she wasn’t surprised by the vote and is expecting the approval process to take a very long time.

Centro approval would be fantastic for our village. I don’t think everyone realizes what a dark cloud exists over that property while it sits rundown and vacant. Centro would help revitalize that intersection and add much needed parking.

0
Reply
Previous articleMedical Marijuana Benefits and Where to Find it in Westchester
Next articleLetter: Tax Larchmont Store Owners that Stay Empty