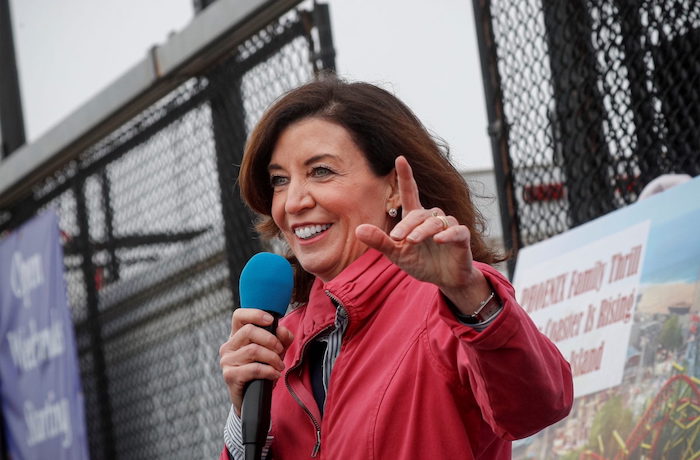 At the end of the campaign, the numbers were close enough to make the outcome uncertain, but Democrats took Westchester County and voted in New York’s first female Governor, Kathy Hochul, who was appointed after the resignation of Gov. Andrew Cuomo.

As recently as late October, polls showed Hochul’s lead over opponent Rep. Lee Zeldin dwindling in the New York suburbs.  Zeldin attacked Gov. Hochul on her handling of the state’s economy and crime; she criticized his stance on abortion and support for Donald J. Trump.

Statewide, Hochul officially received 52.8% of the vote against  Zeldin, who got 47.2%, according to the Associated Press.

Zeldin’s platform was effective at narrowing the gap in the vote in a state where Democrats outnumber Republicans 2:1. In Westchester, election signs for Zeldin were plentiful — one popular slogan “Hochul Wants to Put You in a Quarantine Camp,” a claim the NYSDOH denied, was one that caused speculation about the sentiments of local voters.

Other races on the ballot in Westchester followed suit, with Democrats taking approximately 60% of the vote to about 39% for their Republican challengers.

According to the Westchester County Board of Elections website on Thursday morning November 10, here are the numbers Westchester voters cast in Tuesday’s election:

Local results in Mamaroneck and Larchmont according to the County Board of Elections are here.

Here we are on Day 2 and I still do not see any action from the governor-elect on crime, bail reform, etc as she promised.
Not surprised.