Some critics, called Citizens for a Better New Rochelle, have set up their own website and a petition campaign on Change.org calling for the city to “re-bid” the development project to avoid higher taxes and school overcrowding.

Located on Long Island Sound, the sheltered inlet of Echo Bay spans about 11 acres of city-owned land. (See our previous coverage.) The developer, Forest City Residential Group (of Brooklyn’s Barclay Center fame) has completed a final environmental impact statement that was accepted by the city in July.

According to Mayor Noam Bramson’s website for his County Executive campaign, the Echo Bay site “that is  presently contaminated and inaccessible can be transformed into an environmental and recreational asset for our community.”

Bramson’s web page has an animated rendering of the new waterfront space showing families playing on a green lawn , doing yoga, kayaking off the shoreline and birdwatching from a bridge–all looking very idyllic. 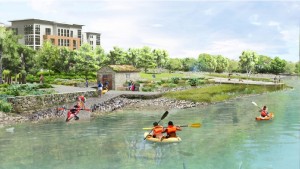 But the latest plan is under attack because, among other things, it has been reduced significantly in scope, according to its critics. They note, for example, that the plan has gone from including 100 luxury townhouses/condos down to none; from 600 rental apartments down to 285; from 150,000 square feet of retail down to 25,000 square feet; and from two 150 room hotels down to none.

The next step seems to be for the city to execute a Land Disposition Agreement, spelling out the physical and financial structure of a development deal. The petition campaign so far has reached 500 signatures.

Oh, and where’s the artist rendering of the development at LOW tide?
I keep seeing the kayakers at high tide, but the kayakers don’t use Five Islands Park which is next door at high or low tide so I doubt they’re going to use this new park much either.
Certainly with only 430 parking spots for all 285 apartments, the 25,000 sq ft of retail shopping plus the park in the development, the parking at Five Islands Park will be much better.

Also its odd that the city’s picture doesn’t show any other buildings? I wonder why that is as there’s certainly other buildings around, like the mamoth sewage treatment plant being built next door.

Its more than dissent, its about a guy who thinks he’s better & smarter than the rest of us which is BS. He’s done a loosey job running New Rochelle, in part because of these ridiculous schemes that seem like good stuff yet cost everyone dearly.