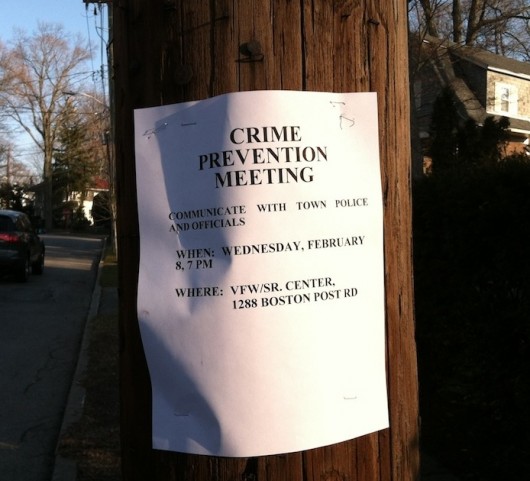 New York State Crime Stoppers has offered a $2,500 reward for information leading to the arrest in armed robberies in Mamaroneck, Pelham and New Rochelle in January.

The Mamaroneck and two Pelham incidents involved commuters walking home from the train station being held up at gunpoint; the New Rochelle robbery victim was a female Iona College student.

The Journal News reports a fourth robbery occurred on Eastchester Road near White Oak Street in New Rochelle on Jan. 29.

In the Mamaroneck, Pelham and New Rochelle robberies, a black man, 5 foot 10 to 6-feet and weighing 175 to 200 pounds, showed a black semi-automatic hand gun, officials said. The suspect, or suspects, was said to have worn a black ski mask and dark clothing.

Crime Stoppers’ announcement came after another weekend touched by the crime wave.

Town police say five cars were broken into while parked overnight Friday at the Carlton House, a North Chatsworth Avenue condominium apartment building in the Town of Mamaroneck.

News 12 reports New Rochelle had multiple robberies over the weekend. Police arrested a suspect in a Monday afternoon robbery.

The Town of Mamaroneck and Larchmont Gardens Civic Association will host a crime prevention workshop at 7 p.m. Wednesday  at the VFW/Senior Center, 1288 Boston Post Road in Larchmont.

My wife and I moved to Pelham in August to raise the family here. I don’t like what I’m hearing concerning recent crime reports in Pelham and the surrounding area. On top of that, yesterday, between 10:30 a.m.-10 p.m. my bike (an anniversary gift 3 weeks ago from my wife) was stolen on the north end of the train station. Would someone please tell me why there are no cameras to deter such thefts. It’s beyond me.