Could an Earthquake Take Out Indian Point?

After today’s earthquake, we thought this story we ran last March was well worth reviving.

In the wake of the disaster in Japan, Riverkeeper, a member-supported clean water advocacy group based in Westchester,  has called for an immediate, objective, and independent analysis of the risk of earthquakes near the 40-year-old Indian Point Nuclear Power Plant owned by Entergy.

It is located in Buchanan, New York, about 20 miles from southern Westchester, and it primarily generates electricity for Westchester and New York City.

An independent 2008 study by Columbia University Earth Observatory found that Indian Point’s three reactors sit at the intersection of two active seismic zones where the risk of earthquake as large as 7.0 on the Richter scale exists.

According to Riverkeeper, the study “…contradicts Entergy’s earlier representations that the risk of seismic activity is low (i.e., 1.0 to 3.0). This is highly significant because the energy released in a 7.0 level earthquake is literally over a million times more than in a 3.0.” (continued below map)

In a statement from Entergy, the company says it “will continue to monitor closely the situation in Japan, and lessons will be learned and translated to even greater safety and effectiveness to meet the challenges of the most adverse and unexpected events.”

Last fall, the federal Nuclear Regulatory Commission (NRC) listed the Indian Point Plant, along with 26 other plants across the U.S., as among those whose “seismic safeguards” were in need of review by the agency. That review has not been completed yet. However, when the NRC calculated the odds of an earthquake causing catastrophic failure of a nuclear power plant in the U.S., the Indian Point reactor 3 was ranked number one for the highest risk!  See the top rankings listed here.

Congresswoman Nita Lowey (D-Westchester/Rockland) today issued the following statement on the NRC’s rating. “We have always known that a nuclear facility in our nation’s most densely populated region could pose serious risk to the public and must be operated with the highest safety standards.  Coming on the heels of a potentially catastrophic meltdown in Japan following an earthquake, news that Indian Point is at greatest risk in the U.S. of earthquake-related failure is highly alarming, made even more so considering flaws in Indian Point’s emergency preparedness and evacuation plans in the event of an incident.”

Lowey added, “A 1 in 10,000 chance that the core could be damaged by an earthquake, exposing the public to radiation, is greater than the chance of winning the lottery, getting struck by lightning, or being attacked by a shark.  That is not acceptable. NRC should not consider relicensing Indian Point reactors 2 and 3 in 2013 and 2015 until the risk the public faces has been addressed.”

After 9/11 a serious effort was made to try to close Indian Point, citing numerous problems with the plant,not the least of which is that it sits on a fault line. Hopefully,Governor Cuomo will feel the same responsibility his father did when he closed Shoreham Nuclear Plant on Long Island due to the fact that evacuation plans were deemed impossible to execute.

The percentage or ratio, or other mathematical representation of the risk factor is not even relevant.

It could happen. That is fact.
Look at what is within the 50 mile circle. That whole area would become a dead zone. LOOK at it, the 50 mile dead zone: 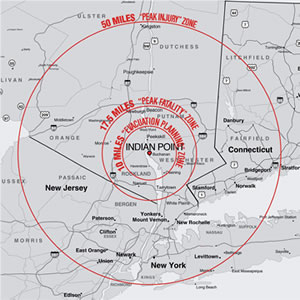 Yes, if you live here, especially on the outside 10 or 20 miles, you will probably get away.
NEVER TO RETURN.

New York City, Long Island, Westchester, Rockland, Firfield, ALL GONE.
How long will it take this country to recover from that?
Not in our lifetimes.

All these calculations of risk are done without their reciprocal. That reciprocal is eternity.

As the former chair of the League of Women Voters Environment Committee, I have worked with Riverkeeper for many years to shut down this plant. The former County Executive didn’t want it, our local elected officials (whose districts don’t include Buchanan) and many, many residents would like to see it closed. The plant leaked strontium 90 for years without letting the public know. By today’s standards, this plant would NEVER be built here.

Entergy claims that the electricity needs are too great to take these plants offline. But every time they have to go offline for yet another safety violation, we don’t seem to suffer rolling blackouts.

I challenge everyone in Westchester to show conservation works. Unscrew one lightbulb you don’t need, take your phone charger out of the wall when not in use, and put a strip on your tv and computers so that you can turn the machines all the way off. I would bet we would save enough energy to more than make up for Indian Point’s contribution.