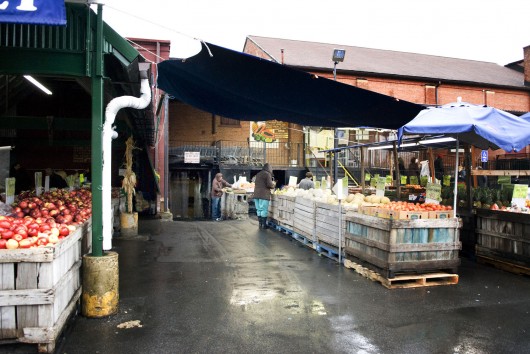 Do you ever shop at Viva Grande, the abundant no-frills New Rochelle fruits and vegetable market?

The building that houses Viva Grande Farms has the distinct honor of being the former home of Mighty Mouse, Heckle & Jeckle, Tom & Jerry, Deputy Dawg and a host of other animated characters created by Terrytoons.

Erected in 1915 – 1916 as the lodge hall of the New Rochelle Council No. 339, Knights of Columbus, (est. 1898), the building served as the fraternal organization’s meeting place and community hall until 1949. That year, Paul Terry purchased it and relocated his flourishing animation studios from the nearby Kaufman Building (270 North Avenue), where his pioneering firm had begun in 1934….

When Terry selected 38 Centre Avenue as the new home for his growing company, he made sure it was also within a few blocks of the train station, as many of his top animators lived in Manhattan. Also, he chose a site just a block from a string of thriving vaudeville and motion picture theaters. They were readily available viewing venues for the scores of cartoons his company cranked out each week. In this building, Terry continued to ramp-up the pace of production. Of his business he often remarked, “Disney is the Tiffany’s, and I am the Woolworth’s.”

By 1951, his industrious animators were producing up to 26 Technicolor cartoons and several million comic books each year. The pace continued until 1956 when, as the 1,000th cartoon and a television show were on the drawing boards, Terry suddenly sold the company and property to CBS for millions of dollars. Terrytoons continued under the ownership of CBS/Viacom until the 1970s, when the animation faded out altogether.

Think of that next time you’re buying tomatoes.

And in the early 70’s it became one of the leading TV commercial production houses with its specialty being toy commercials. By early 2000, Firehouse Films, as it was named, was shooting hundreds of toy commercials annually for all the major toy and game marketers, including Hasbto and Mattel. The owner and film director was John Sturner who, I believe, still resides in New Rochelle.