A report released Wednesday by Save the Sound reveals serious bacterial contamination at ten locations in and around Mamaroneck Harbor. The report is based on summer water quality testing conducted at 25 sites for 5 days in June and July.

“The shockingly high levels of bacteria found at some testing locations are no doubt part of the reason Mamaroneck’s beaches are closed so often,” said Tom Andersen, Save the Sound’s New York program and communications director.

The report provides data from water sampling sites located in Mamaroneck Harbor and along the Mamaroneck River, Beaver Swamp Brook/Guion Creek and Otter Creek. You can view an interactive map of the sites here.

Eight sites along the waterways that flow into Mamaroneck Harbor, the report said, need further testing and investigation to determine the causes of elevated levels of E. coli and fecal coliform bacteria. Two sites—at a local A&P supermarket and at the Mamaroneck Beach & Yacht Club—require follow-up testing to confirm that fixes have been implemented successfully.

You can download a copy of the report by clicking here; a copy of the data spreadsheet for the summer sampling can be downloaded here. 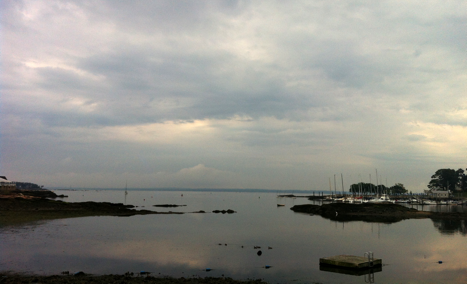 Save the Sound sampled 25 sites in cooperation with local volunteers and Village of Mamaroneck officials, and with technical support from Earthplace Harbor Watch of Westport,CT.   Mamaroneck Village was chosen as the location of the project because of its history of beach closings due to pollution.

The organization says that “pollution from leaking sanitary sewers, storm sewers, streets, parking lots and other sources forces the Westchester County Heath Department to preemptively close five beaches in Mamaroneck (as well as four in New Rochelle and one in Rye) each times it rains a minimum of a half-inch within 24 hours.”

Google map and photograph courtesy Save the Sound.

i think the plastic bag ban in Larchmont starts soon—that might help??