Coming Up at the Picture House

In this two hour lecture, Beatles expert Scott Freiman performs another of his fascinating Beatles “deconstructions”.  This time, Mr. Freiman traces the birth of the Beatles and the creation of their famous first singles.

As always, Mr. Freiman brings along a treasure trove of rare audio and video along with stories of the composition and production of classic Beatles tracks.

Beginning with their days as The Quarrymen in Liverpool, Mr. Freiman traces the evolution of the Beatles — from the Cavern Club to Hamburg.  The journey continues from their initial recording sessions at EMI for “Love Me Do” through their first several groundbreaking singles, including “Please Please Me,” “She Loves You,” and “I Want To Hold Your Hand.”  Learn what it was like to record at EMI in 1962.  Listen as the Beatles‘ songwriting prowess develops.  Watch some of the Beatles‘ earliest television appearances. 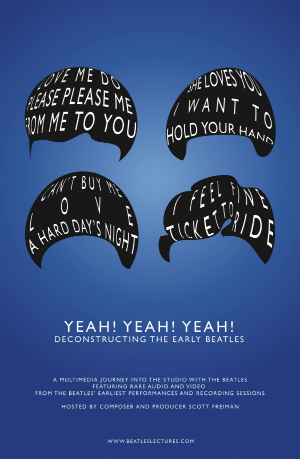 Musicians and non-musicians, Beatles fanatics and casual listeners will all enjoy Mr. Freiman’s presentation. You will never listen to the Beatles or any other music the same way again! Anyone who was present at Scott’s previous events here at the Cinema, Deconstructing Sgt. Pepper, Looking Through a Glass Onion: Deconstructing the White Album, Tomorrow Never Knows: Deconstructing The Beatles’ Revolver and A Trip Through Strawberry Fields, knows that no Beatles fan should miss this entertaining and illuminating event.
Scott Freiman combines his knowledge of The Beatles with a career as a composer, producer and educator. His original music has been featured in award-winning films and performed at Lincoln Center and Carnegie Hall. Scott is the owner of Second Act Studio, a state-of-the-art music and video studio for composition, recording and production. Learn more about Beatles Lectures at www.beatleslectures.com.
Join acclaimed Beatles scholar Scott Freiman for an entertaining and mind-blowing live multimedia journey through the creation of the Beatles’ classic early albums.