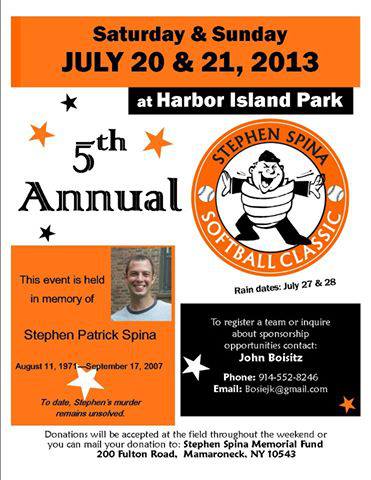 Stephen Spina’s sister, Christine Foley, dutifully holds this fundraiser in memory of her brother each July, but both Foley and police say Spina’s murder remains an open investigation.

Registration is now open for the Fifth Annual Stephen Spina Softball Classic July 20 and 21 at Harbor Island Park in Mamaroneck, NY. The tournament will have a men’s division as well as a co-ed division and the cost is $300 per team to participate. The tournament committee also is seeking local businesses interested in sponsorship opportunities. For more information on how to become a sponsor or to register for the tournament, please contact John Boisitz at 914-552-8246.

The tournament, now in its fifth year, was established in memory of Spina who was found murdered in his Richbell Road apartment on September 17, 2007. To date, his murder remains unsolved.