Coming Up: Should Judy Clark Be Released from Prison? 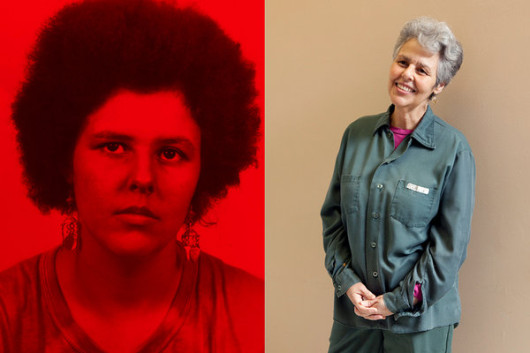 Have you read about Judy Clark?

Judy Clark is in prison, and has been for 30 years,  for her role as a getaway driver in a 1981 robbery in Nyack that left three people dead. “Now 62 years old, she has undergone a profound transformation, from an unrepentant radical to a respected educator and caring role model. The only way she’ll ever be released from prison is if Governor Cuomo grants her clemency.”

Maybe you saw this piece in the New York Times Magazine.

On whatever side of this issue you fall, there is sure to be a fascinating discussion  Thursday April 25 at 7:30pm at the Katonah Village Library, to raise awareness of Judy Clark.
Tom Robbins (author of the New York Times piece), Rabbi Arik Wolf (Chabad of Bedford) and Sara Bennett (Judy’s Attorney) will be speaking.  They will provide an overview of Judy’s past and present, her efforts at clemency, and what people in the community can do.

My name is Judith Clark and I am writing to you to ask you for the extraordinary relief of executive clemency. I am in my 31st year of a 75 years-to-life sentence for my participation as a getaway driver in the 1981 robbery of a Brinks truck in Nyack, New York in which a Brinks guard and two police officers were killed. I was 31 years old at that time, and had spent my entire young adult life wrapped in increasingly isolated, self-contained radical organizations and activities. While other co-defendants fought their cases legally, I refused to participate in my trial and went unrepresented.

I am now 62 years old and profoundly remorseful, having spent more than 25 years coming to terms with my past. While my life is fueled by a hope-filled commitment to repair, I never forget that the lives lost on October 20, 1981, cannot be brought back. I live each day with sorrow, shame, and regret for my role in the deaths of Peter Paige, Edward O’Grady and Waverly Brown.

My change of heart was not swift or easy, because it involved giving up my identity and rebuilding myself on different terms. Please permit me to tell you a little about my life in prison and how this change came about.

About two years into my sentence, my parents sued me for custody of my daughter, Harriet. I had to confront the truth that I had abandoned my infant child to participate in a robbery. I began to acknowledge my reality and gradually unravel the identity and group loyalties that had propelled me up to that point. Realizing the hard questions my child would eventually ask, I began to face them myself and sought help in order to change. Working to repair my family relationships pushed me to think deeply about the three families deprived of a father and husband.

And so what has become central to my life is being mindful of my connection with others and understanding others through empathy and respect. At the heart of these efforts is my awareness of the harm I caused. I have wrestled privately and publicly with my responsibility for the three men who lost their lives on October 20, 1981, and I never forget that their families continue to suffer. In 1993, I wrote my first public letter disavowing my “political prisoner” position and expressed regret, guilt, and remorse for what I had done. In a 2002 letter of apology that was printed in the Rockland County Journal News, I acknowledged that the mindset that allowed me to participate in the crime came from having cut myself off from everyone outside our insular group and from having abandoned my own inner moral compass.

Changing that mindset defines my life in large and small ways. In the closed, often tense environment of the prison, I practice and promote conflict resolution and mutual respect. Knowing that I can never undo the terrible losses I contributed to gives me an appreciation of the fragility and sacredness of life and human relationships. This approach to living has taken me to places I would never have imagined. In 2005, I undertook a special chaplaincy training program, Clinical Pastoral Education, and last summer I was one of the first inmates ever to be certified.

I look at the world differently now. Instead of abstract slogans, I see and am moved by flesh-and-blood people. I hope that my contrition, which was so publicly absent during the trial, and my long record of taking responsibility through sincere change and work on behalf of others, will bring some solace. I welcome any opportunity to participate in formal or informal victim-offender negotiation.

I am fortunate to have been able to accomplish a lot in my time in prison. I was able to enroll in a college program, and after attaining my B.A., I went on to earn a Master’s Degree in Psychology, focusing on mothers and children, and I’m working on my Ed.D. I taught pre-natal classes and presently work with mothers who live with their babies in a special nursery program. I helped build an AIDS counseling and education program that became a model for other prisons. When public funding for college was eliminated, I worked with the administration, other inmates, and community members to establish a privately funded college program in which hundreds of women have since participated. I’ve written scholarly articles and poetry and was part of a writing group, documented in a film, where we explored our crimes and our efforts to repair. I live in a special housing unit where we raise explosive detection dogs for law enforcement, and service dogs for wounded veterans.

My daughter, now 31 years old (the same age I was when arrested), is an incredible young woman – a writer of deep insight and humanity who knows my love, my remorse and efforts to change. When I was her age, I was a fierce, frozen young woman who did not care enough about her own life to defend herself in a court of law. Today, I care deeply about myself, my daughter, and others.

Governor Cuomo, I have watched in awe at all that you have accomplished in your first year, from marriage equity to the new and fairer tax code. I’ve witnessed your strength and willingness to do what you believe is right. I turn to you as my only hope for release. Recently, I received a card from a former nursery mother who is doing well in the community. She thanked me for using the lessons of my own life to challenge her to be more honest about her own choices. She concluded her letter, “But now we need you with us out here.”

Today, I am seeking a second chance – to live in society as a responsible, contributing member. I ask you to consider me worthy of reconsideration, compassion, and clemency.

Let this woman go. The reality is she has zero probability of committing another crime. To just continue to keep people has revenge or punishment after they have shown that they have been rehabilitated is not something a civilized country should be doing. We all know the department of corrections is anything other than rehabilitative. If I did my job as poorly as these people do I would not be employed. They need to show there successes. Anything else is just a thinly veiled jobs program. Put one part of the population in prison forever to give the others jobs !

thanks- we will change it!

Thanks for publicizing. The event is actually at the Katonah Village Library.

Coming Up: Larchmont Arts on the Avenues – April 2- 30