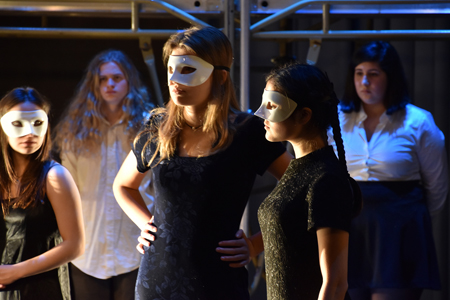 Mamaroneck High School’s Shakespeare Players will Perform Romeo and Juliet and Much Ado About Nothing 3/8-3/13 at the Hommocks Auditorium. Reserved seating tickets available online only.

Both plays are particularly relevant today. As Moore expressed, “both of these plays deal with issues that are present in the lives of young people today. In Romeo and Juliet, we have young people dealing with an urge to rebel against their authority figures when they begin to realize that the ideas and philosophies they have been raised with are not in line with what they want their lives to be.

The play illustrates the difficulty of breaking out of a cycle of violence, hatred, and dissention between people that has been occurring for generations. It greatly reflects much of the issues we still deal with as a society.

While rapturously funny, Much Ado About Nothing addresses the great consequences that slandering others can cause. In an age when technology easier and easier to bully and cut others down this play reminds us of how damaging rumor, insults, and untruths can be.”

New twists? This year’s production of Romeo and Juliet will be “slightly modern to reinforce the idea that this story does not belong to any one period of time.” And, there will be two original songs set to Shakespeare’s language in Much Ado About Nothing composed by Skyler LesserRoy, a sophomore, and Emily Morris, a junior at MHS. Performances will take place in the Hommocks Auditorium, Hommocks

General Admission tickets can be purchased at the door a half hour before the show — $12 adults, $8 students — or during lunch at MHS in the overpass tomorrow through Friday.

Much Ado About Nothing