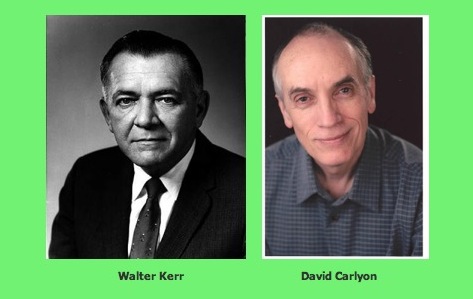 from the Larchmont Historical Society:

Larchmont–Join the celebration, as LHS honors Walter Kerr and David Carlyon for their contributions to the arts.  Kerr, a Pulitzer Prize winning playwright, author, and theatre & film critic and Carlyon, an award-winning author, actor and playwright, both hail from Larchmont.

Walter Kerr (1913-1996), a long-time Larchmont resident, was a theater critic for the New York Herald Tribune from 1951 to 1966 and the New York Times from 1966 to 1983. He won the Pulitzer Prize for Criticism in 1978. He and his wife, Jean Collins Kerr, raised their six children in Larchmont Manor in the house known affectionately by local residents as the “Don’t Eat the Daisies House.”

David Carlyon is a writer, actor, playwright and former clown with Ringling Brothers and Barnum & Bailey Circus. He is not only a graduate of both the University of Michigan and Berkeley Law, but also earned his Ph.D. in theater history from Northwestern University. His award-winning “Dan Rice: The Most Famous Man You Never Heard Of” is a biography and cultural history of 19th century America.

Why Kerr and Carlyon? Although the men have much in common, the link is Kerr’s book “Silent Clowns,” a scholarly study of silent film comedies and comedians.

The program and ceremony will take place on Sunday, April 14th at 4:00 p.m., St. John’s Episcopal Church, 4 Fountain Square, Larchmont. The event is open to the public. Admission is free for LHS members, $10 for non-members. Refreshments will be served, so please RSVP to Dee van Eyck, LHS Programs Chair 914-834-0449 or deevaneyck@aol.com

The event is open to the public.  Admission is free for LHS members, $10 for non-members.  Refreshments will be served, so please RSVP to Dee van Eyck, LHS Programs Chair, 914-834-0449 or deevaneyck@aol.com