Coming Up: Frida-mania – Opening May 16 at NYBG 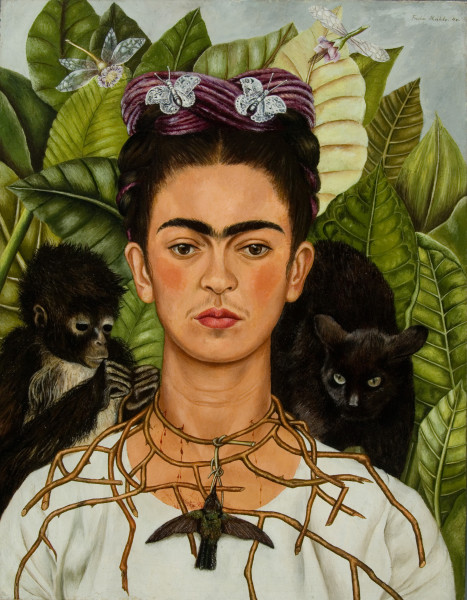 Many of us got our first glimpse of Mexican artist Frida Kahlo’s life with the award-winning 2002 biopic starring Salma Hayek and directed by Julie Taymor, of “Lion King” fame. But the “Frida” you can see at The New York Botanical Garden’s exhibition opening May 16 is a totally different person from the film version.

The new exhibition, “Frida Kahlo: Art, Garden, Life” is the first to “re-imagine” Kahlo’s garden and to explore her appreciation of nature– including the many plants, insects, and fascinating animal imagery in her paintings. The exhibition differs from many others on view across the country that the New York Times featured in a recent Style Section story  about “Frida-mania.”

Kahlo adored the garden at her home, the Casa Azul, in Coyoacán, Mexico. Her painting studio directly overlooked the garden with its cobalt blue walls and fabulous collection of native Mexican plants. The garden was both an inspiration and a private haven during Kahlo’s personal battles with chronic illnesses and disabilities.

Tufts University art historian, Dr. Adriana Zavala, who curated the exhibition, says: “Most exhibitions on Kahlo focus primarily on her biography and the dramatic events in her life, but in doing so they undermine her extraordinary intellect, her imagination, and her exuberance and love of life. This exhibition shows the scientific basis of her understanding of the natural world, as well as her interest in the dualism of life’s forces.”

Kahlo studied and was well aware of the symbolic and historical meanings of Mexico’s native plants, as well as their chemical and therapeutic properties. Certain plants in her paintings are clearly identifiable– plants like dragon fruit, prickly pear, cherimoya, sapodilla, and mamey sapote.

“These fruits have emblematic meaning in some works, Dr. Zavala explains, or they are suggestive of witty puns. In other paintings they appear simply to offer the eye a feast of color and texture.”

According to Dr. Zavala, Kahlo’s earlier works are more surrealistic and feature red angel’s trumpet, prickly pear, fuchsia, poinsettia, philodendron, and marigold. Angel’s trumpet has narcotic properties; prickly pear is part of the Mexican national emblem, originating in the Aztec glyph for their capital city Tenochtitlan. Marigolds are associated with Dia de Muertos or Day of the Dead, a Mexican holiday celebrated on Nov. 1.

Fourteen of Kahlo’s paintings and works on paper — many borrowed from private collections — will be on view during the exhibition, showing a wide range of her work. In addition, the Conservatory and other sites around the garden will feature Mexican plants and related themes.