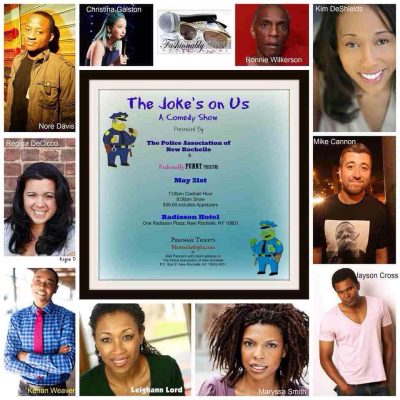 from The Police Association of New Rochelle:

The PBA of New Rochelle and Fashionably Funny Productions have teamed up to bring the community together in laughter.  All proceeds of this fundraiser will go back into the community.

This features “comics you have seen on Comedy Central, HBO, MTV, and FOX”

This event will be held on Thursday May 21st at the Radisson Hotel located at One Radisson Plaza, New Rochelle.

Tickets are $36 and include appetizers.Guests can arrive at 7:00pm for Cocktail Hour
with an 8:00pm Show.

Or
Mail Payment with a return address to
The Police Association of New Rochelle
P.O. Box 51 New Rochelle, NY 10802-0051

Ronnie Wilkerson:
DVD and CD on ITunes named The Count is Complete and can be heard on Sirius Satellite radio on Jaime Foxx The Foxx Hole

Christina Galston: Stand Up 360, This Week in Sex,MTV3

*Line up Subject to change