Coming Up: Centro Larchmont, Round 2- June 16 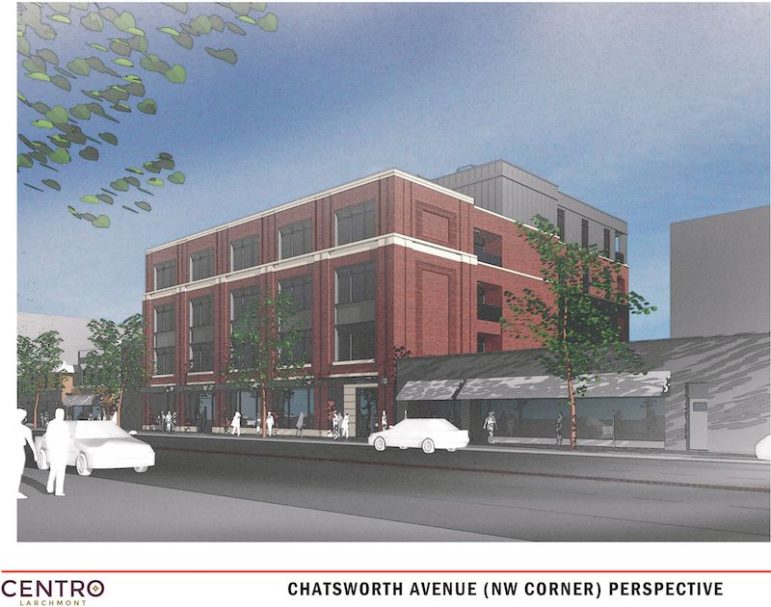 Downsizing seems to be key in more ways than one when it comes to the latest version of the proposed Centro Larchmont condominium/retail project.

With half the number of residential dwellings and a smaller scale outer appearance than was in the original proposal, Elk Homes hope to gain approval in a second go around with the Larchmont Village Planning Board. The new design includes 14 condominiums, street level retail space, a pedestrian walkway and parking area.

The building remains five stories but incorporates a setback on the top floor which allows the building to present as four stories from the Chatsworth Avenue view.

Official documents filed with the Village address some community concerns voiced during public hearings which ultimately led to a halt of the project.

“The design incorporates many of the aesthetic comments heard throughout the process…including the use of full brick rather than modular brick, greater articulation on the façade and a more rhythmic and symmetrical façade pattern on Chatsworth Avenue and facing Wendt Avenue,” according to Jonathan Kraut of Harfenist Kraut & Perlstein,

Impact on local schools, in particular the possible overcrowding at Chatsworth Elementary, also sparked outcry with the previous proposal. Reducing the number of residential units slashes the estimated number of children expected to live in the building to only two as developers expect to appeal more to empty nesters seeking to downsize rather than to growing families.

“Although the project has been significantly reduced from the original contemplated scope,” Kraut says, “we believe it can still be a bright spot in the Village downtown for many years to come, providing new luxury apartment units and first- class retail/commercial space.”

The presentation of the re-designed Centro Larchmont takes place at the Village Planning Board Meeting, Tuesday, June 16, 7:30pm. The public can watch the live meeting through the Zoom App. Centro Larchmont designs and information, as well as instructions for watching the meeting, are available on the village website: http://www.villageoflarchmont.org

Larchmont doesn’t need to further urbanize. There is just no reason to build an apartment complex here except to make the developers more money – which would come at the expense of residents’ quality of life. Why is this even under consideration?