If your child has been involved with rec basketball in the area, you know Coach Jordan …the mild-mannered man that can quiet down a gym full of rowdy boys with a voice barely above a whisper.  What you may not know, is that “Coach” has a new book. 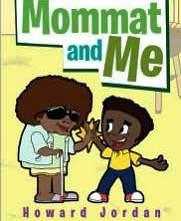 Mommat and Me is an illustrated story of Howard Jordan’s childhood memories of his blind grandmother, Mommat, and her influence on him as a basketball and football player, a coach, and an advocate for youth sports.  Jordan wrote and illustrated the book, which is based on his childhood in Mamaroneck.

Jordan learned from his grandmother that the key to achieving a goal is to work hard and believe in yourself.  She said everyone should pursue their dreams as “nothing beats a failure but a try.”

The best sports advice Howard Jordan ever got was, “close your eyes and listen!”

Jordan went to Mamaroneck Avenue School, attended Hommocks the first year it opened, went on to Mamaroneck High School and then to Concordia College in Bronxville where he was an All-American in basketball, football and track.

While playing football and basketball at Concordia College, Jordan majored in Art, hoping to pursue his dream of becoming a cartoonist upon graduation. But his day of writing and illustrating books had to wait as he was picked up by the New York Giants.  Following a training season with Giants, he went semi-pro for a short time, and then finally played for the Baltimore Colts.

His coaching career began at Rye High School, where he took the basketball team to win the county and regional championship.  He coached Pop Warner youth football league in Westchester and modified football for Mamaroneck High School.  Jordan also formed a local AAU team of 12 boys that didn’t make their high school basketball teams, taught the kids to play as a team, not as individual superstars, and now five of them are playing college basketball at competitive schools.

Hampshire Sues Village of Mamaroneck and Planning Board